Trevathan a constant force on defense 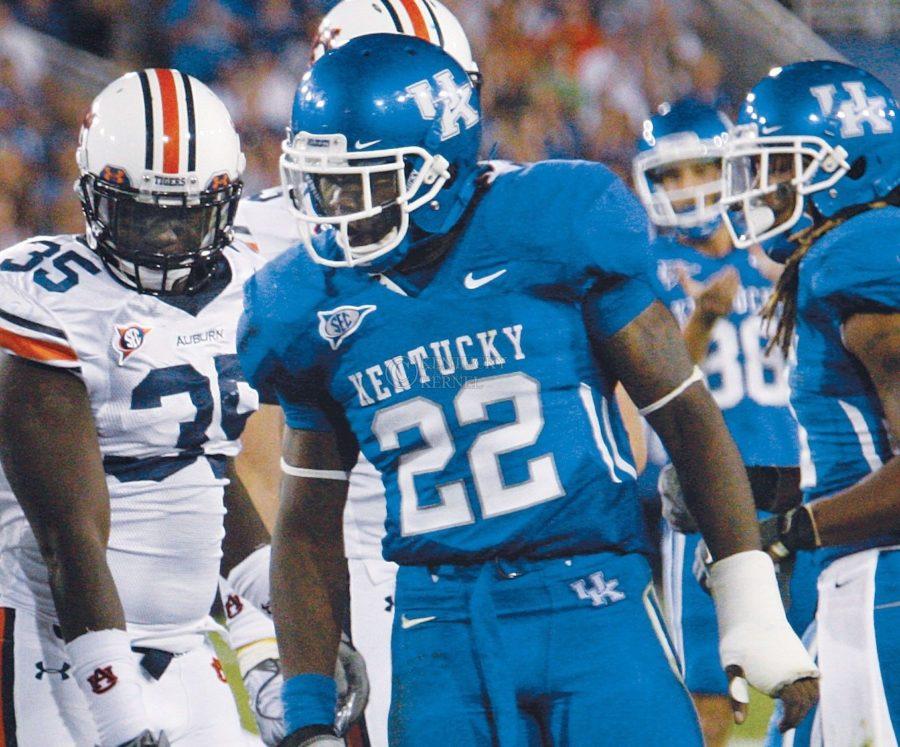 Danny Trevathan is the UK football team’s version of the ‘Waterboy.’

“When I see somebody take the ball, I think like they stole from me or something and I’m trying to get it back,” the junior linebacker said. “I just have an attack mentality like Bobby Boucher; all of negative stuff in my life, I try to apply it to the field.”

Although Trevathan said that he doesn’t watch the movie with Adam Sandler reprising the role of Bobby Boucher very much now that he’s grown up, the Leesburg, Fla., native has also matured into a formidable defensive force.

Trevathan leads the Southeastern Conference in tackles with 97 and has recorded five straight games with double-digit tackles, including a career-high 17 versus Auburn on Oct. 9.

His strong play is a continuation of the recent legacy left by former UK linebackers, who Trevathan said still reach out to him to give him encouraging words and advice.

Wesley Woodyard, now with the Denver Broncos, is one such former UK linebacker who Trevathan said he communicates with through Twitter frequently. Last time Woodyard was in Lexington, he told Trevathan that he needed to be “that guy” who set the tone defensively.

Keeping the tradition of successful linebackers alive is something Trevathan values.

“I don’t believe in letting people down in any circumstances,” he said.

In a season where the UK defense has been maligned for letting opponents score on too many big plays and for not playing consistently for the duration of an entire game, Trevathan’s efforts can’t be faulted.

“He’s like a missile,” senior defensive tackle Ricky Lumpkin said. “You see him out there, I see him out there, when he hits his hole and when he has a free shot he goes in there and makes it. It’s very rare that you see two-two (a reference to Trevathan’s No. 22 jersey) miss a tackle, two-two doesn’t miss tackles.”

Even when wearing a cast because of his broken left hand sustained in the first half versus Akron earlier in the year, Trevathan wouldn’t let his tackling ability be compromised.

He took the cast off two weeks ago against South Carolina, which was two weeks earlier than he was supposed to.

“I was tired of being the cast boy or the cast man,” said Trevathan, who also sported a cast for much of last season, yet still registered 82 tackles.

Trevathan’s performance has been even more rock steady this year compared to last because  of consistency that was partly born from the help of a Rock.

UK strength and conditioning coach Rock Oliver helped Trevathan bulk up and become even quicker after a rigorous conditioning program in the offseason.

“I’m probably in the best shape of my life,” Trevathan said. “Coach Rock did a good job of teaching me how to work my body, get the soreness out, stretch well, lift well, lift correctly, stretch correctly and all that stuff.”

UK head coach Joker Phillips said he has been pleased with Trevathan’s play all season, but that

he still expects him to elevate the play of teammates.

Trevathan pointed to the recently improved play of junior linebacker Ronnie Sneed, who has 14 tackles in the past two games, as a teammate who has taken notice of his play and decided to emulate it.

“I’m trying to teach people to not be just like me, but to be better than me,” Trevathan said.