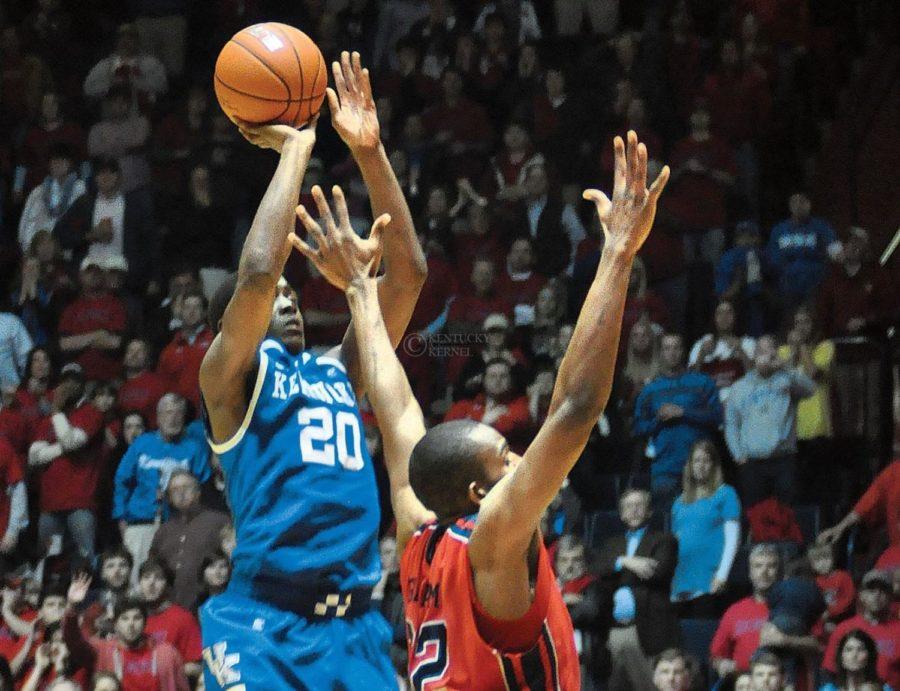 In UK head coach John Calipari’s first two seasons, his Cats have been unbeatable at Rupp Arena. But this season, when UK (16-5, 4-3 Southeastern Conference) has taken its show on the road, the team has looked vulnerable.

Cats fans can now add the University of Mississippi Rebels to their list of road losses, after UK fell at the hands of Ole Miss 71-69 on a late three-pointer by the Rebels’ point guard Chris Warren.

Trailing by as many as 11 points in the second half, UK battled back and took a late lead 69-68 in the final minute of the game. With 15 seconds left and the shot clock winding down, Darius Miller got the ball in the corner with a wide open three-point attempt to potentially ice the game. Instead, Miller drove and passed the ball to DeAndre Liggins, who was forced to take a fadeaway three-pointer as the shot clock expired. His shot failed to draw iron, giving Ole Miss possession.

“I mean, everybody who watched it said, ‘Why wouldn’t he shoot that ball?’” Calipari said.

The shot-clock violation gave the ball to the Rebels with 10 seconds remaining. What followed was a bomb by Warren, who knocked down an NBA-range three with 2.9 seconds left to win it for Ole Miss in front of a packed Tad Smith Coliseum.

“You have to give Ole Miss credit,” Calipari said. “They battled and won it late. We’re not going to win that way. We are only playing six or seven guys, and if a couple guys don’t show, then we will struggle.”

Miller and Liggins, both juniors, along with senior Josh Harrellson, combined for only 10 points in the starting lineup, along with seven turnovers. As a team, UK accumulated a season-high 18 turnovers, leading to 18 points by the Rebels.

“My point guard had five (turnovers) in the first half, and it’s like ‘What’s going on here for us?’ because that is something we don’t do,” Calipari said. “We don’t turn the ball over, but we got sloppy, guys got away from what they do well, we gave them the lead, and they hung on.”

The freshman trio of Brandon Knight, Doron Lamb and Terrence Jones combined for 57 of the Cats’ 69 points for the game, including all 34 points in the second half.

Calipari expressed a common theme in his postgame remarks: “We are who we are.” It was Calipari’s explanation for the freshman-heavy scoring load in the second half, for the lack of veteran presence in late game situations, for the unusually high number of turnovers and most strongly for their soft play inside and their tendency to be pushed around in the paint and under the rim.

“Right now I can’t say any different,” Jones said. “He was watching everything and if that’s what he says then that is what we are right now.”

UK now carries a road record of 1-3 in conference play, with a trip to Gainesville, Fla., to meet the conference-leading Florida Gators looming this Saturday.

“Our schedule only gets harder from here,” Jones said.

Calipari and his players admit this game should have never come down to Warren’s final shot.

“No matter where we are at, we have to come out and play hard,” Knight said. “No matter who is in the game.”