Harrellson last to cut the nets in postgame celebration 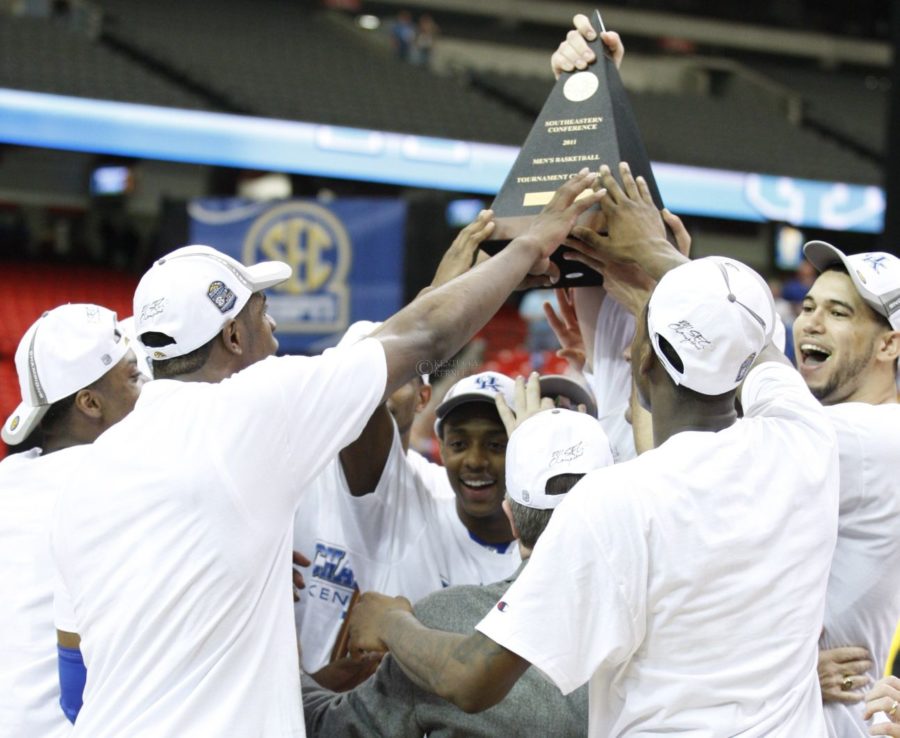 Standing gleefully on the court after winning his second straight SEC Tournament Championship, UK’s lone senior called out instructions for cutting down the nets.

It was Harrellson’s second time celebrating an SEC Tournament title, but his first playing a significant role on the team.

“I definitely wanted to be the last one to cut those nets down,” Harrellson said in the postgame locker room, the net hung around his neck.

Of those freshmen, Doron Lamb climbed the ladder first. Not because he had fought through his ankle injury, though.

“I just grabbed the scissors first,” Lamb said. “Because I was so excited. It’s my first time cutting the nets off, so I just wanted to cut the nets off first.”

Lamb was clearly excited; he was dancing throughout the postgame celebration.

On the other end, team managers cut down that net; they are a part of the team, too. But it was the progression of players snipping their section of the net that everyone paid attention to. UK went through the progression, as players, already decked out in championship shirts and hats, took their turn.

It’s one of the most symbolic images in college basketball.

“It symbolizes our hard work,” said perhaps the hardest worker of them all, Brandon Knight. “It’s like a little prize, that piece of the net.”

When Harrellson finished and climbed down, he and the team raced toward the locker room, still soaked in applause.

“I sprinted back,” Harrellson said. “I think I beat everybody by a couple minutes. I just had so much energy.”

He, and the rest of the team, had a lot of energy throughout the entire post-game festivities. Immediately after the final horn, the team received their championship gear and celebrated in front of the fans. Then, they received the trophy, and mobbed Darius Miller when he was named the tournament’s MVP. (Miller, Knight and Harrellson were named to the All-Tournament team.)

As for what Harrellson would do with the net draped around his neck?

“Hang it on the SEC Championship trophy,” Harrellson said, before adding a stipulation. “If I give it to them.”