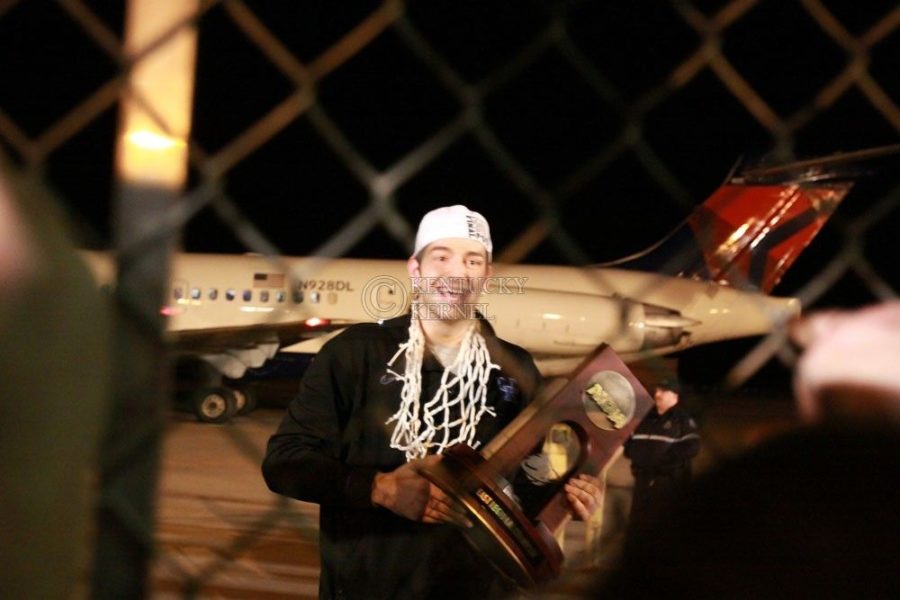 The Chick-fil-A box sat right in front of me as I hammered away my story on deadline during one of those relatively unimportant December games. The box wasn’t mine. It was Josh Harrellson’s.

When he walked over after giving interviews, most of his answers chippy and funny, Harrellson offered a piece of chicken. We weren’t boys (still aren’t, and that’s Matt Jones’ job, anyway), or even acquaintances — I had seen him maybe three times in my short time on the beat — but here he was, offering a piece of chicken to some random kid reporter. I declined – I have the fortune to eat at the UK Student Center between class nearly every day – but it stuck with me as being the consummate Josh Harrellson move.

It wasn’t an isolated incident, either. Sometime later in the year, a kid wandered down from the stands and asked Harrellson if he could dunk for him in the game. Harrellson of course accepted. “I’ll be looking for you,” he told the kid before he walked back to his seat. At the end of the year, Harrellson held the video camera for ESPN’s Mark Schlabach as he interviewed another UK player. “His camera work was better than most reporters I’ve had help me,” Schlabach said. Harrellson never felt like he deserved the limelight, even though it was he who got to keep the net after both the SEC Championship and the Elite Eight win.

By that point, Harrellson had vaulted further into the hearts of UK fans by retaining his endearing personality while discovering a brand-new on-court game and persona, fully evident when he flung a ball off Jared Sullinger’s chest instead of his feet. It was an act both spiteful and assertive. Josh Harrellson was not there to be a player who didn’t stand a chance against the Freshman of the Year. He was there to play, and to win. Even though he ditched the jokes in practice and during games, however, he maintained his jovial manner at almost any other time. He was the media and fan darling. After his career ended, Harrellson was nothing but positive and gracious in defeat, standing in front of his locker.

Harrellson stood as the antithesis of the proposed Calipari archetype. He was not supremely talented – he still plays exactly how you would expect a 6-foot-11 white guy would, actually – and he was not a whirling path of destruction through the college basketball landscape. But he was no less appreciated. Calipari admitted he’s had to rethink his coaching principles after seeing Harrellson’s transformation this year.

His opportunity as a senior wasn’t all that deserved, really. He made no claims of being a hard worker his sophomore and junior seasons, choosing instead to be team clown. His story is not that of someone who worked his ass off for three years before finally being able to emerge. His chance to become something bigger came through the NCAA’s rules, firstly, although that initial chance was seized through the well-documented hard work stemming from a Twitter outburst. In a way, though, his atypical path to success made him even more beloved.

His professional options are available by necessity, rather than choice. While he is determined to make it, it’s no certainty he will get drafted or get a solid look, at least this year. The NBA always covets size, but he’s essentially maxed out of that equally coveted “upside.”

He might as well have been talking about his own senior season.