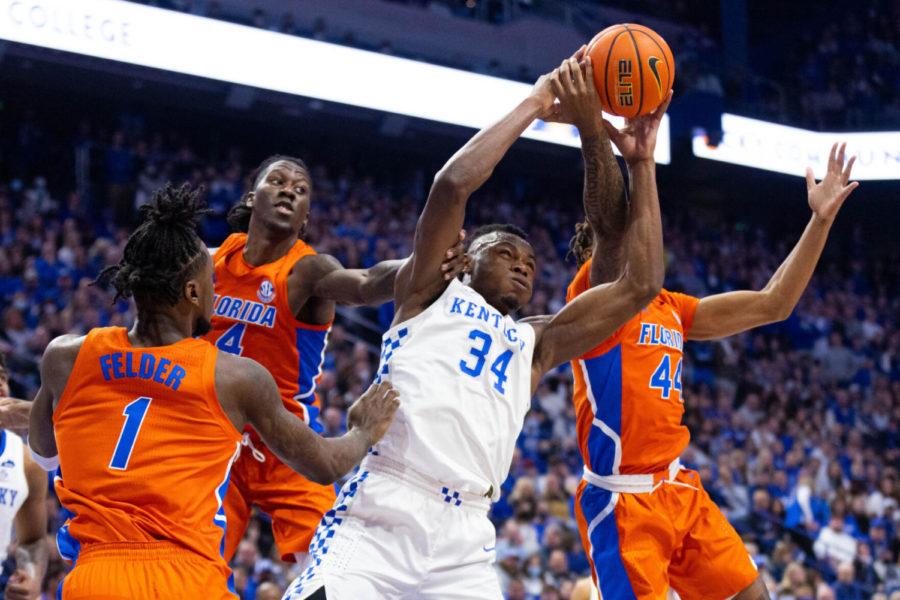 No. 5 Kentucky defeated the Florida Gators 78-57 on Saturday evening inside Rupp Arena.

The victory makes six straight for the Wildcats, as well as winners in 10 of their last 11 games.

Despite the firm victory over a rival, Big Blue Nation is left with a sour taste in its mouth.

Early in the second half, Kentucky guard TyTy Washington Jr quickly limped off to the locker room after an entanglement with Florida’s Brandon McKissic, going after a loose ball.

Washington would not return for the remaining of the game due to a “lower leg” injury. UK head coach John Calipari said that he expects Washington to be “day to day.”

“He could be out a week or two, who knows,” Calipari said. “He got hit hard.”

Kentucky was already without forward Jacob Toppin, who suffered an ankle injury in the Cats’ previous game against South Carolina.

The Wildcats, who have been injury-riddled all season, are now getting used to the challenge of adjusting mid-game.

After Washington’s injury at the 12:50 mark in the half, Kentucky would still outscore Florida 26-15 the rest of the way.

Despite being two players down, Kentucky only needed to rely on one Wildcat on Saturday.

National Player of the Year candidate Oscar Tshiebwe cemented his position as a frontrunner for the award, collecting 27 points and 19 rebounds for his 19th double-double of the season.

When asked how impressive Tshiebwe has been this season, Calipari put it simply:

Tshiebwe collected a double-double in the second half alone, scoring 14 points and grabbing 10 rebounds. Calipari has made sure to harp on Tshiebwe, telling the West Virginia transfer to not focus on putting the ball in the basket, as much as looking to make an impact on the game that only he can:

“If you stop worrying about offense, you’ll score more, wow isn’t it funny how that works?”

Following yet another dominant performance, Calipari, like the rest of the Bluegrass, is sold on Tshiebwe being in the running for the title of top player in the country.

“I would say [yes]…but there may be some bias,” he said. “The reality of it is, if you watch and you see who he is, you got to love the kid. He plays hard, he never says a word about the officials, he smiles. He plays his heart out. There may be a couple of players who are have more impact on games than him, but I’d have to see it.”

Resident sharpshooter Kellan Grady executed once again for Kentucky, scoring 15 points on 5-13 shooting, cashing in on four 3-pointers along the way. Grady has now reached the double-figure mark in the scoring column six games in a row.

In 24 games, Grady is shooting 44.2 percent from beyond the arch, the highest mark in the SEC.

Wheeler would finally contribute to the scoring column on Saturday after going seven halves of basketball without connecting on a field goal.

The Georgia transfer broke an 0-19 shooting slump with his first shot against the Gators, clanking in a 3-pointer, his first make since a trey in the second half against Kansas. Coincidentally, Wheeler bookended his cold streak at a range where he shoots at just a 26.5 percent clip.

When asked about his lack of scoring, Wheeler focused on the positives, like the six assists and three rebounds his finished with against the Gators.

Florida brought a new-look defense to the Wildcats on Saturday, playing a 3-2 zone, the first time that UK has had to face such this season.

“Thank goodness we faced them,” Calipari said in reference to the zone.

Kentucky was still able to hit its usual offensive numbers, shooting 46.3 percent from the field as a team and nearing the 80-point threshold that the team has surrounded all season long.

Although the zone was a fresh look for UK, they managed to take care of the basketball better against the Gators, turning the ball over just five times. The Cats came into Saturday averaging 12 TO’s a game.

UF’s Colin Castleton, who leads the team in points and rebounds, did just that against the Cats, scoring 18 points and grabbing seven boards.

The injury bug would also bite the Gators, as starting guard Tyree Appleby, who averages over 10 points a contest, would leave the game early in the first half after colliding with Wheeler.

After sitting for the remainder of the half, Appleby would give it a go after halftime, but would be unable to contribute. In eight total minutes, Appleby finished scoreless with an assist and a rebound.

Florida would hang-in with the Cats until late, shooting 45.1 percent as a team. The Gators downfall came down low, as neither Castleton nor Anthony Duruji were able to contain Tshiebwe on either end of the court.

UK would outrebound Florida 41-25, while also doubling the Gators’ 3-point totals, making 10 to UF’s five, widening the margin at the end of the game, as the Cats’ final three makes were deep balls from Grady and Davion Mintz.

The six-game winning streak is the longest of the season for the Cats since they won seven in a row following the season-opening loss to Duke.

Ailments, injuries and victories aside, Calipari is still focused on one thing, March.

“Fresh minds and fresh legs at the end of the year, that’s the most important thing,” Calipari said.

Regardless of who is in or out, Calipari is confident that his crew is deep enough to make a run when the time comes.

“We got enough guys who can come in and do their thing.”

Kentucky will now once again hit the road and head to Knoxville for a rematch with No. 19 Tennessee.

In the first meeting between the two teams, Kentucky floored the Volunteers with a 107-79 drumming.

Round two between the rivals is set for Tuesday, Feb. 15 at 9 p.m. EST inside Thompson-Boling Arena.