The Pros descend on Rupp Arena 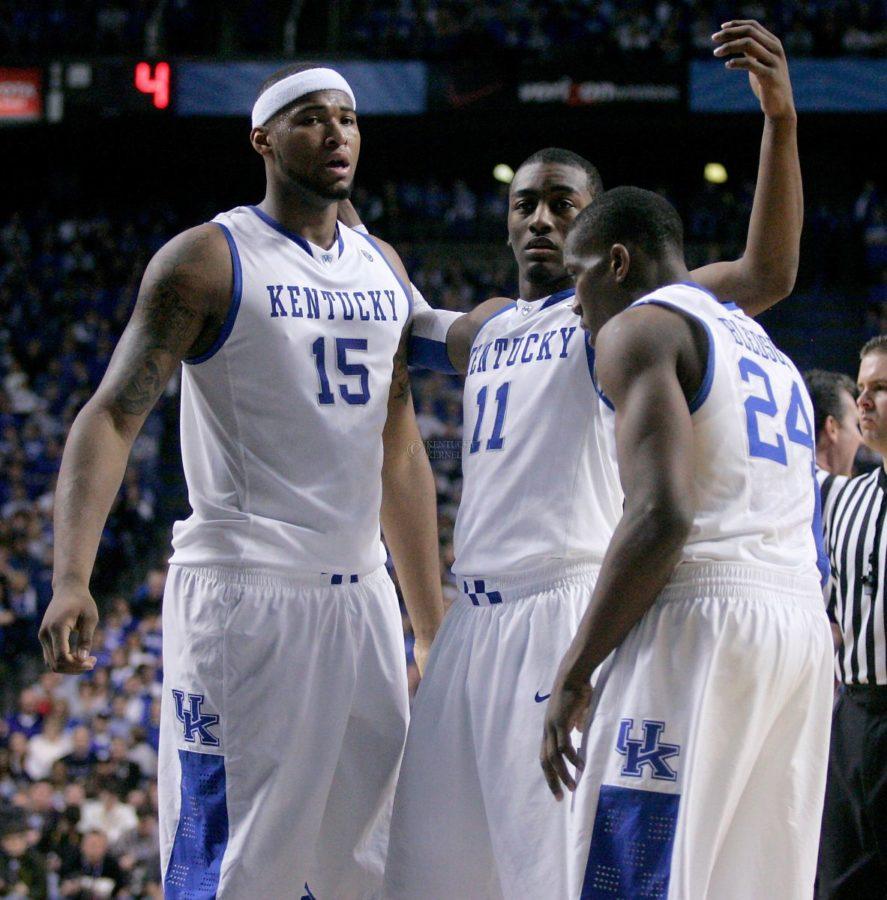 UK freshman John Wall brings together freshman DeMarcus Cousins and Eric Bledsoe near the end of the second half of UK 82-61 win over the University of South Carolina on Thursday, Feb. 25, 2010 at Rupp Arena. Photo by Allie Garza

At least three NBA players will be sitting on the bench at all times during a summer exhibition game on Aug. 15.

Where else could this game happen?A perfect confluence of factors had to merge, and UK had them all. The NBA lockout provided the springboard, freeing up the schedules for players to return to Rupp. The college program has to be productive enough to even have enough NBA players — make that enough quality NBA players — to come back. And there had to be a connection to a talented opponent, which John Calipari provided by coaching the Dominican team. In fact, it makes you wonder if this game was more of a reason and less of a byproduct to his taking the job, considering he had already put the plan in action by the time he officially accepted the job.

The game’s going to be fun on a basketball level, as long as the participants play as semi-hard as summer exhibition games allow. That it’s happening in the summer, a time usually replete with repetitive recruiting semi-news and meaningless lists, is even better. This should be a better draw than the highly touted “Game of the Summer,” which pits stars from two summer leagues against each other. I’ll pass on that. Give me eight former UK players now in the NBA against a national team that has three NBA players of its own.* Give me the explosive backcourt of Wall and Rondo, the reuniting of Prince and Bogans, or the frontcourt of Cousins and Mohammed that makes one of them feel like the world’s tallest, most-skilled-at-basketball grandpa. (Seriously, though, Nazr came into the league two decades before Cuz.)

I’ve been watching the Memphis summer basketball league, where each team has one or two Memphis Tigers on it, and the games are consistently entertaining. Replace moderately good college players with ultra-talented NBA players and multiply it by five, and you get an answer that’s probably not mathematically relevant but is sure to be a really, really good adjective.

Summer games carry a different sense of entertainment with them. The players will play — that’s what they’re wired to do when presented with a basketball and a hoop — but it’s also a loose enough environment to have fun with it. Guys go for the highlight-reel moves more often. There’s more back-and-forth. And how many “moments” will we have between Calipari, pacing the other sideline, and some of his former players, especially when Cousins deconstructs whoever is guarding him?

There’s more than just the game, though. Calipari has extended an invite to every former UK player — who knows how many will actually come back, but hopefully not all of them because that would just be impractical — to be honored at the game. Joe. B Hall and Sam Bowie will combine their brain power to figure out how to juggle eight NBA players in a lineup, which I’m sure they can do quite effectively. Recruiting — oh, you don’t think Calipari can sell how awesome this event is, that going to Kentucky means you can not only go pro quickly but also be beloved when you return for things like this, something no other school can pull off? Calipari has one more bullet point on his selling list to kids.

Even though UK is not affiliated with the game, it is a decidedly UK event. And that’s a good thing.