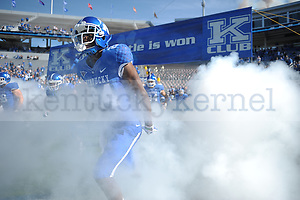 UK took the field Saturday for its Homecoming showdown with the Jacksonville State Gamecocks at a crossroads in its season. Losers of four straight, including three straight losses by a combined 117 points to open SEC play, there was less buzz surrounding the team’s Homecoming game than any UK game in recent memory.

But on a picture-perfect autumn afternoon in front of Cats fans from past and present, UK found reason to celebrate by defeating Jacksonville State 38-14.

The UK defense was on top of its game, putting constant pressure on JSU at the line of scrimmage and wreaking havoc in the Gamecocks’ backfield. With both offenses trading punts early, UK junior safety Martavius Neloms took matters into his own hands by exploding into the pocket, sacking JSU quarterback Coty Blanchard and forcing a fumble that Neloms would recover himself and run back for the game’s opening touchdown. UK did not relinquish the lead for the remainder of the game.

“It was a big play for me in my career,” Neloms said. “My (defensive backs), they covered long enough to make the quarterback hold the ball so I was able to get in there and make a play. The ball just bounced my way on that play and I was able to make a play.”

The offense, whose struggles have been well chronicled, was hitting on all cylinders against an overmatched Gamecocks defense. The Cats put 38 points on the board against JSU, a season high, behind 445 yards of total offense.

UK found most of its success on offense in its running game. After sophomore running back Raymond Sanders joined freshman back Josh Clemons on the sidelines with an injury, junior running back CoShik Williams established the Cats’ deadliest rushing attack so far this season. Williams would finish with 22 carries for 148 yards — his first career 100-yard rushing performance.

“He’s got great speed,” UK running game coordinator Mike Summers said of Williams. “If we can get him some space then he can use his speed. It was good to see him with some space.”

The Cats’ offensive line played its best game of the year as a unit, dominating the line of scrimmage all game long. UK ran the ball with ease no matter who was lined up in the backfield, and Newton was rarely hurried when dropping back to pass. Of UK’s 445 total yards, 340 of them came on the ground, a season high for the offense.

“(The offensive line) showed up real good today,” Williams said. “I think our offensive line came together as a group and they pinned up their blocks, they run blocked good, they pass blocked good, and after every play I really tried to congratulate those guys.”

Junior quarterback Morgan Newton, who was benched in three straight games entering Saturday’s action, was 10-16 for 105 yards with two touchdowns and no interceptions. Junior wide receiver La’Rod King was a big part of Newton’s success with five catches for 84 yards and two touchdowns.

After the game, King showed support for his quarterback, who was a focal point for criticism as UK’s offense struggled in the first half of the season.

“He’s our quarterback, so I’m never going to turn my back on my quarterback no matter what,” King said. “We’re going through a downfall, or we had been, but you have to keep pushing and that’s why we get better.”

King’s big day was made even bigger when he became the 22nd receiver in school history to attain 1,000 career receiving yards.

Gamecocks’ running back Washaun Ealey, who ran for more than 150 yards and five touchdowns in Commonwealth Stadium last year as a Georgia Bulldog, had a relatively quiet performance despite some impressive numbers on the ground. Ealey carried the ball 16 times for 120 yards against the UK defense, but never managed to cross the goal line with the ball, limiting his impact on the game.

UK’s defense won the turnover battle for the game, forcing three turnovers that all would lead to points for the Cats.

The defense was once again led by seniors Danny Trevathan and Winston Guy, who remain the top two tacklers in the SEC on the season. Guy led the team with 12 tackles, including eight in the first 20 minutes of action, en route to overtaking Trevathan for most tackles in the SEC. Trevathan had five tackles of his own and recorded his first interception of the season on the last play of the third quarter, setting up King’s second touchdown reception.

Joining Williams and Neloms on the list of surprise players to have breakout performances in the Homecoming game was sophomore linebacker Avery Williamson, whose seven tackles were a career high, and junior running back Jonathan George, who ran for most of his 66 yards and one touchdown in the fourth quarter replacing Williams.

“I knew I was going to get a lot of reps already, and I just had to take advantage of it,” Williamson said. “Over the season, I just kept on improving, I’ve been improving each week. I’m getting to the ball better and just being more of a playmaker.”

Having improved its record to 3-4 on the season, UK completed the out-of-conference portion of its schedule with a 3-1 record.

The Cats must now focus on improving their 0-3 conference record with five SEC games remaining on the schedule, beginning with next weekend’s game against Mississippi State.

“There was some improvement,” Phillips said, “but we’ve got to improve even more next week.”