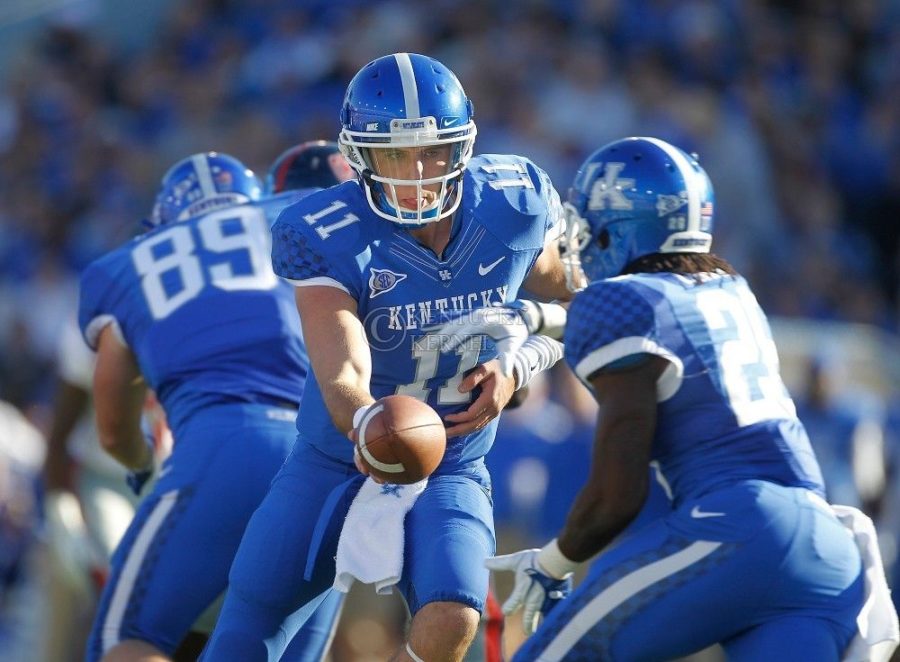 In a game between two SEC basement-dwellers both desperate for a win, it was the UK offense who made the difference in the fourth quarter, earning the Cats their first win in the SEC this season. Behind three offensive touchdowns in the game’s final 12 minutes, UK (4-5, 1-4 SEC) defeated the Ole Miss Rebels, winless in conference themselves since their win over UK last October, by a score of 30-13 Saturday in Commonwealth Stadium.

“It was a long time coming it feels like,” senior linebacker Ronnie Sneed said. “We had a lot of letdowns this season, but everybody clicked today and I feel like we showed what we can do when we all click.”

In freshman quarterback Maxwell Smith’s first career start, the Cats came at Ole Miss with the most balanced offensive attack they’ve shown this year. Smith finished 19-36 against Ole Miss, throwing for 283 yards and his first two career touchdown passes. Smith also went his second-consecutive week throwing more than 30 passes without an interception, helping UK finish drives and put more points on the board.

Senior wide receiver Matt Roark continued his resurgence into the offense, recording another seven catches for 116 yards following his 13-catch performance last week. Since Smith took over at quarterback for the Cats, Roark has 20 catches and 232 yards receiving.

“I set an expectation for myself and I have to push myself to meet it every week,” Roark said. “I didn’t really do anything different in practice, just kept going hard and working.”

When asked what Smith has been doing two revive Roark’s season the last two weeks, Roark simply answered: “He’s throwing me the ball.”

But Roark wasn’t the only UK wideout allowed in on the fun. Junior wide receiver La’Rod King also helped his new quarterback Saturday, catching three passes for 102 yards and a touchdown. The Ole Miss defense left King (6’5″ with plenty of jumping ability) in single coverage deep down the field a number of times in the first half, but Smith was not able to find the touch to get him the ball. In the second half, however, Smith found King for completions of 38 (the touchdown completion) and 55 yards, giving the offense the spark it needed to pull away from the Rebels. 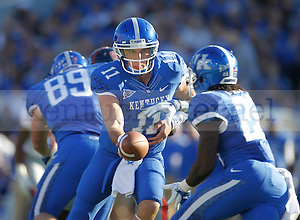 UK head football coach Joker Phillips was so impressed with his quarterback’s performance, he has already named Smith the starter for next week’s game against Vanderbilt.

UK’s success throwing the ball also carried over to the ground game and junior running back CoShik Williams. Williams, in his third straight week of significant playing time, rushed 25 times for 111 yards and two touchdowns of his own, achieving the 100-yard mark for the second time in that three-week span.

For the day, the UK offense amounted 398 total yards of offense: 283 yards through the air and 115 more on the ground.

The defense did its part for the Blue & White, holding Ole Miss to just one touchdown and keeping the Rebels scoreless for the final 22 and a half minutes of the game. On its first two drives, Ole Miss drove the field to the red zone, only to be held to a field goal by the Cats’ defense. After taking an early 6-0 lead with 3:19 still remaining in the first quarter, UK would outscore Ole Miss 30-7 for the rest of the game.

Senior linebackers Danny Trevathan and Winston Guy led the defense once again Saturday, recording 17 and 10 tackles respectively. Trevathan’s 17 tackles were a game-high for either team, and his interception in the second quarter represented the only turnover by either team all afternoon.

“I just try to play off my guys and feed off them,” Trevathan said. “I just try to motivate those guys. The offensive line did a good job of shutting down the quarterback and trying to let me fill voids and exploit the gaps. All the credit goes to those guys.”

“Coach always tells us, statistically, when we get turnovers for the offense, we have a better chance of winning the game,” Sneed said. “Usually we do, last game was an exception. When we can get those turnovers for the offense, it gives them the opportunity to get on the field  and make plays and get touchdowns. So everytime we do that, it really turns out in our favor.”

“Our plan to win that we go over every week is first win the battle. Win the turnover margin,” Phillips added. “Again we didn’t have any turnovers… That is how you win games.”

The Cats now must win two of their final three games in order to clinch its sixth straight bowl berth, a goal thought unachievable following the loss to South Carolina. Beginning next week, UK will travel to Vanderbilt and Georgia, before finishing up the season at home with arch-rival Tennessee on Senior Day.