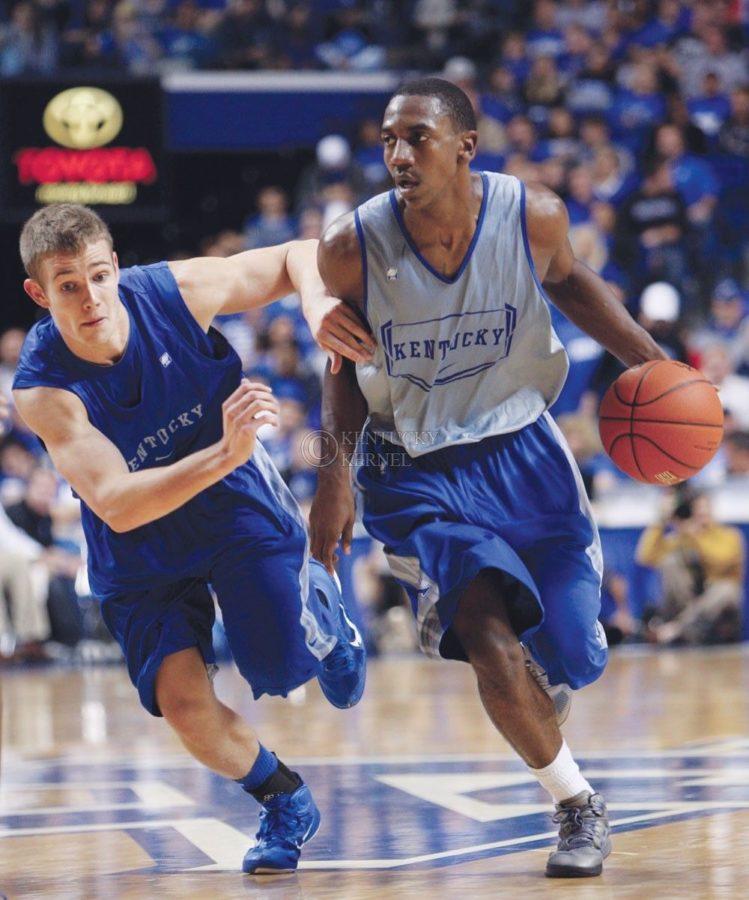 After three weeks of playing itself, UK finally gets a chance to play someone else.

It’s been non-stop blue vs. white, but now it’s time for some new faces.

“We finally get to jump on someone else,” freshman Marquis Teague said. “I’ve been waiting to do this since high school, playing here.”

That would be an historic exhibition game against Transylvania, whose players will march to Rupp Arena — a 0.4-mile route that, according to Google Maps, will take nine minutes to traverse — for the first meeting between the two Lexington teams in 100 years.

“And if they beat us,” UK head coach John Calipari said, “it will be another 100 before we play again.”

It isn’t likely. While the Division III Pioneers were picked to win its conference, it has only one player taller than 6-foot-6, and that player is 6-foot-8.

While Calipari understands the importance of the meeting, he said he would prefer to scrimmage them behind closed doors. That would allow him to stop the game when he saw something he didn’t like from his team and coordinate with the other coach to go over different situations.

While these “secret” scrimmages aren’t rare for teams — Jeff Goodman of CBS reported more than 100 private scrimmages were happening this week around the NCAA — they are impractical for UK.

Not when Rupp Arena fills up for the preseason, cross-town matchup. Not when UK makes about $700,000, according to Calipari, from the game.

So they will play. Calipari said the team still has the same issues exhibited in the Blue-White scrimmage last week. He specifically cited pick-and-roll defense, low-post defense and defensive rebounding as areas he would be keeping an eye on in the first exhibition of the season.

“He just pretty much told us, pick it up or he’s going to make us run,” Teague said.

The exhibition games will also provide insight into who will be the starting lineup once the regular season rolls around. Calipari has long held UK has seven starters. He said he hasn’t figured out who the five will be, but the next two games will help determine that.

“I think what will happen is we’ll play a couple exhibition games and everybody will know,” Calipari said. “It will be obvious.”

For some, coming off the bench — both against Transylvania and later in the year — will be an adjustment.

“We’ve all been the stars of our high school teams, but we’re all just looking forward to the opportunity to play,” Kyle Wiltjer said. “Whatever our roles are, we all want to play them so we can win.”