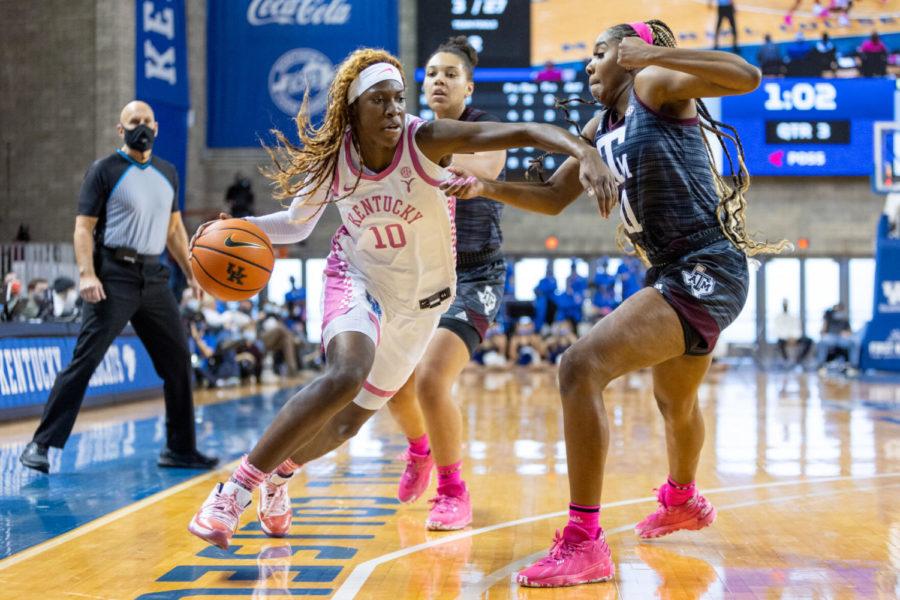 The game was Kentucky’s first at home inside Memorial Coliseum since Jan. 20, when the Cats were defeated 77-52 by Florida.

Both teams checked in at No. 11 and No. 12 in the SEC standings respectively on Sunday, with tournament aspirations on the line.

Texas A&M’s Destiny Pitts, who finished the game having scored 20 points, stressed the importance of the matchup.

The first quarter was highly competitive, with the Wildcats ultimately winning the period 26-16.

Kentucky freshman Jada Walker was quick to put points on the board in the quarter, knocking down a 3-point basket in her first possession of the game.

Sloppy play by the Aggies early on allowed Kentucky to exploit seven points off turnovers, something the Cats have struggled to do as of late, a trend that would not continue in the later portions of the matchup.

The second quarter spelled disaster for both teams on the offensive side of the ball, but especially Kentucky, as the Cats went 0-6 from the field and recorded six turnovers for the majority of the period.

It wasn’t until nearly eight minutes into the quarter when Kentucky junior Dre’una Edwards scored the first UK points of the period with two made free throws.

Though Kentucky struggled in the quarter, the Aggies were unable to pull away due to troubles of their own, also scoring just five points.

Kentucky led by 12 points at the halfway point.

Unfortunately for the Cats, Texas A&M got hot from the 3-point line in the second half, quickly knocking down nine points from beyond the arch, including six from back-to-back Pitts deep balls to give A&M a lead.

Though the Aggies took the advantage, Kentucky refused to back down, eventually retaking the lead and entering the fourth quarter up by two.

In a physical final period, Kentucky was unable to once again create separation, struggling to stop Texas A&M on defense.

“I thought we got a little stagnant,” Kentucky head coach Kyra Elzy said. “We took quick shots and we didn’t have good ball movement or player movement.”

The UK offense struggled in the fourth, including its final possession with a chance for a game-winning basket. The Cats held the ball with 30 seconds left and ultimately fell into a trap, being forced to call a timeout with five seconds left. After the extended time to draw up a winning play, the offense once again faltered, leading to overtime.

“I feel like we let our defense affect our offense,” Kentucky’s Rhyne Howard said. “We were giving up easy points and then we weren’t scoring.”

Kentucky was never able to figure out its woes on both sides of the ball, ultimately being out-scored 18-9 in the loss.

The Cats host No. 1 South Carolina in Memorial Coliseum on Thursday, Feb. 10. Kentucky will look to snap a three-game losing streak against the team who began the skid for that has resulted in the Cats losing seven of its last eight games.

The matchup against the Gamecocks is set to tip-off at 7 p.m. EST and will air on ESPN.