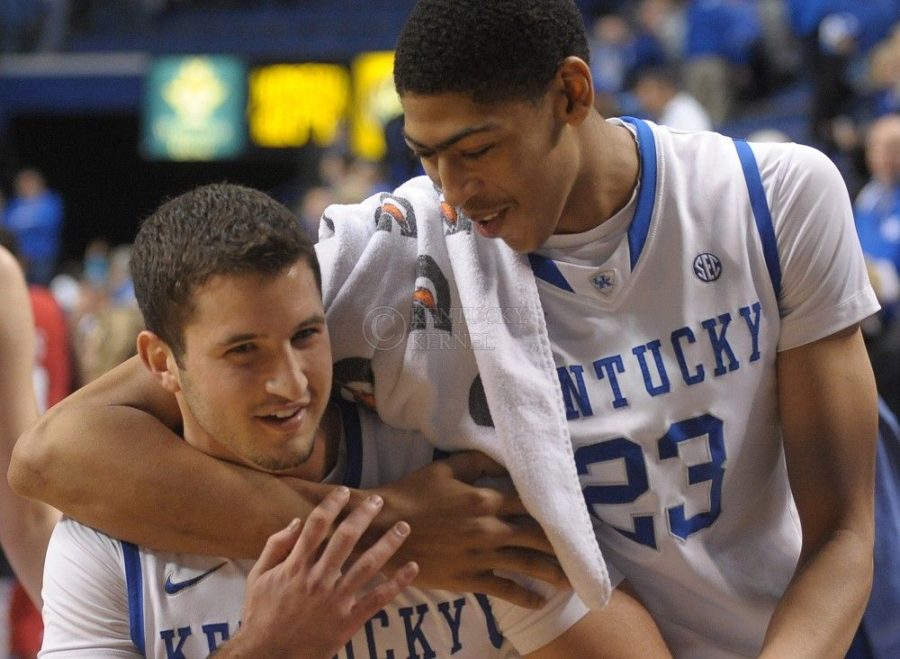 Walk-on Sam Malone scored two points in the closing minutes of Radford. “He ain’t shy,” Terrence Jones said. “That’s one thing. Jarrod (Polson) was shy last year, Brian (Long) is still shy a little bit. Sam just goes out there and plays.” Malone makes the most of his minutes — minutes he rarely sees, in games or practices. Most of his time is spent rebounding for the team or learning the scout team plays to help prepare UK for its opponents. “They deserve what they get (when the score),” Jones said, noting how much the walk-ons sacrifice for the team. “It makes us proud when they score.”Calipari has said teams will use a slow-it-down approach on offense to try and beat UK. If opponents do that, Calipari doesn’t want his team just standing around on defense until the shot clock gets low. “You’ve got to really bother them,” Calipari said. “So try to steal balls, try to get up in people, try to be active with your hands, block balls and run. After a while you’re wearing them out more than they’re wearing you out.”Calipari said that 10-point win over Old Dominion shook the confidence of some of the players. “After Old Dominion you had a lot of players in there wondering if they were any good, and wondering if our team was any good,” Calipari said. “We play Penn State, we’re world beaters, we’re beating anybody, where’s the Lakers? Then you go to ODU and you’re like, ‘Oh my gosh, we’re not very good and I’m not very good and what is wrong with me?’” Anthony Davis said the blowout against Radford helped the team gain some confidence back.Doron Lamb, however, wasn’t buying into everyone’s criticism of the team against Old Dominion. “I don’t know why everybody thought we played bad against ODU,” Lamb said. “We played bad a little bit against the zone. … We’re used to blowing teams out. That team made shots they normally don’t make.”UK made 21 of 24 free throws, its best performance of the season, but Calipari said it was deceiving. “When you’re up 30, you can make free throws,” Calipari said. “I need to know when it’s a two‑point game with two seconds to go and you’re on national television, who’s making those?” UK is shooting 68.4 percent on free throws for the season.Remember Terrence Jones’ massive dunk? I’m still looking for a YouTube clip of it (UPDATE: Wildcat World has a clip of the play here) because I can’t adequately describe it. Jones said it was just a play he was trying to make (and even gave Play of the Day honors to Sam Malone’s layup). Doron Lamb liked it a little bit more than that. “If I see SportsCenter, I’ll look for it,” Lamb said. “That play was crazy.Jones said an important part of playing for Calipari is focusing on what he says, not how he says it. “I mean, Coach yells,” Jones said. “He’s a loud talker.”If you missed it yesterday, Marquis Teague was the story. And coming up, my Inside the Play feature will be on UK’s 2-3 zone defense.