3 things to watch when UK takes on Penn State 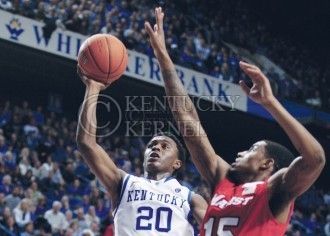 What to keep an eye on when UK plays Penn State Friday and either Old Dominion or South Florida on Sunday in the Hall of Fame Tip-Off Tournament.

1. How UK starts — UK has played two straight sluggish first halves against Marist (a nine-point lead) and Kansas (tied). In both games, UK came back to win easily. Even if UK starts slowly again in either game this weekend, it would probably overcome it again.

Thinking long-term, though, head coach John Calipari knows his team can’t afford to rely on picking up the energy every time. Which is why he’s trying to instill a sense of urgency to start a game, beginning with Penn State.

“We’ve got to learn to start games and understand every opponent, especially because they’re playing us, will be playing out of their minds,” Calipari said. “That’s the lesson for these guys.”

The most integral part to a good start is freshman Marquis Teague’s play. In the first half against Kansas, Teague had zero points on three shots, zero assists and six turnovers.

“He did what just about every guard I’ve brought into the Garden has done,” Calipari said. “You forget about what you have to do to run the team and you start just doing your own thing.”

With the amount of talent surrounding him, Teague doesn’t need to overexert himself. Calipari, in fact, wants him to do just the opposite.

“What happened to us in the first half, and I’ve talked to Marquis about it, his job is to get everyone involved,” Calipari said. “You can’t get your own and get everybody involved.”

2. The rotation — Against Kansas, the five starters played 30 minutes or more. Senior Darius Miller played 20. Senior Eloy Vargas played seven minutes and freshman Kyle Wiltjer played three. That distribution looks more like last season’s, when UK had a tight rotation because it had a limited number of solid contributors, than what it can be this year with “seven starters,” as Calipari said he has.

One of those “starters” is supposed to be Wiltjer. Calipari said he didn’t play against Kansas because the game “got kind of rough” and because UK didn’t pull away until late.

“Kyle needs to play minimum of 15 minutes,” Calipari said. “He really does.”

The fact Wiltjer played three total minutes is indicative of where he currently is. He can be a liability on defense because he isn’t tough enough to hang in a “big-boy game,” as Kansas head coach Bill Self described the UK-KU matchup. Games like the ones this weekend will give Calipari a good chance to work Wiltjer in more heavily and continue his development, because he will need to be a solid contributor, at minimum, by the end of the year.

“I told the team, ‘some of you guys might take less minutes because they have to get minutes,’” Calipari said. “You have to have that full complement of guys, because you don’t know what’s going to happen in the season.”

3. How teams play UK, and how UK reacts — Calipari has long maintained he wants his team focused on itself rather than the opponent. It’s a proactive approach that shows justified confidence in UK’s ability to win by playing its own game.

At times, however, teams will go to extreme measures to prevent UK from doing what it does best. But if a team changes its own approach to counter UK, it’s hindering itself as well.

Primarily, teams will likely try to stop UK from getting out in transition.  Self said he could envision a team that slows the game down having a chance to neutralize UK’s athleticism and speed.

“I would imagine most teams are going to do that to us,” Calipari said.