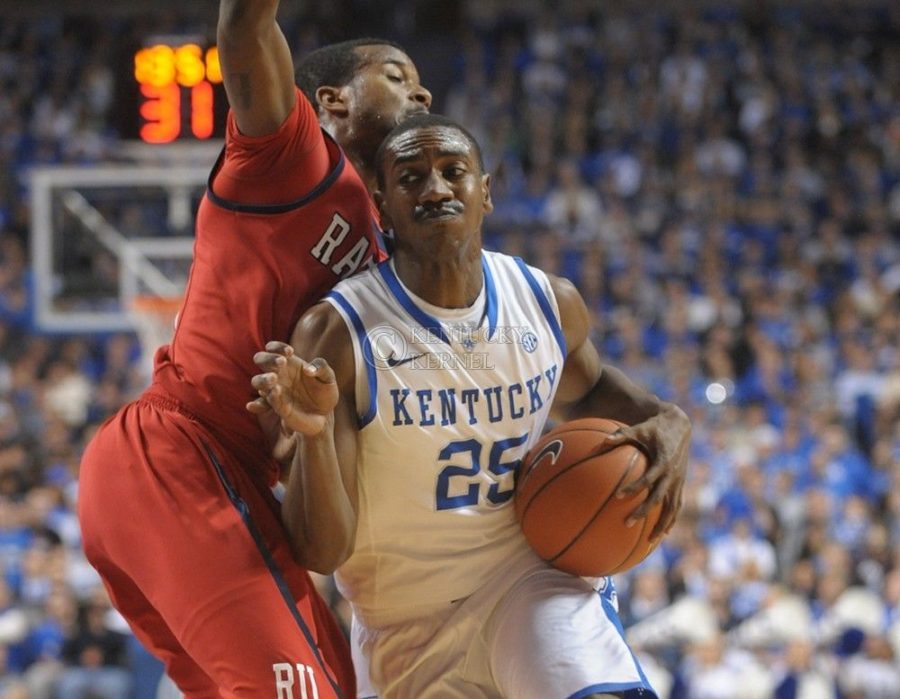 Put the disclaimer not in fine print at the bottom of the screen, but front and center and clear to see: Do not take too much away from UK’s 88-40 dismantling of Radford.

Yes, UK held Radford scoreless through the first 9:36 of the game. But it was only one game ago, a 10-point victory over Old Dominion, that had “a lot of players wondering if they were any good, wondering if our team was any good,” as coach John Calipari said.

But it was also one game ago that Calipari said his team needs to take small, incremental steps toward improving.

The win against Radford was just that.

He scored 13 points on 6-of-8 shooting with five assists and two turnovers. He also got everyone else involved, as every starter scored in double digits. That’s something he’s not used to. In high school, he was The Man. Now, he’s one of five or six men.

“I’m playing with some of the greatest players in college basketball, so you have to give them the ball, get them touches,” Teague said. “It’s been pretty tough, but I’m figuring it out.”

The freshman point guard struggled through the first four games. A lot. He had 18 turnovers, 11 assists and was averaging less than 11 points per game. He admitted after the Radford game he was trying to make the highlight play instead of the easy play. He was overthinking things, trying to cram everything Calipari had told him into one game of perfection.

“I didn’t want to mess up,” Teague said. “That caused me to mess up. … It’s been the hardest time for me ever in my life that I’ve played point guard.”

Teague said he was upset with himself. He expected it to be easier. People around him urged him to calm down, that everything would work out.

If those people weren’t enough, Teague only need look to the past. Calipari’s history with point guards attracted Teague to UK. It also provided comfort when Calipari got on him for mistakes.

“Obviously, it worked out for all his other point guards,” Teague said. “So everything he’s saying is correct.”

Calipari has given him some peace of mind by allowing him “one flub per half.” Teague met that quota against Radford.

“I still don’t want to make that turnover,” Teague said. “But I know when I make it he’s not going to yell at me about it.”

Teague was warned by Doron Lamb before the season started that the heavy instruction would be coming.

“At the beginning of the season, Calipari wasn’t really saying nothing to Marquis,” Lamb said. “Marquis thought it would be like that all season. I told Marquis, ‘he’s going to start getting on you when game time comes.’ Coach is really on him now.”

Teague just needs to focus on what Calipari says rather than how he says it.

But at the same time, it’s not all berating. Calipari has been protective of Teague, defending Teague’s play on Twitter and reminding everyone that it just takes time. Say, a month.

“I’ve got to be more prepared to really break down tape and show him (what I want) and talk to him during games,” Calipari said. “He’s got to be right near me. At least for the next month.”

Wednesday night against Radford was a good first day in that month.