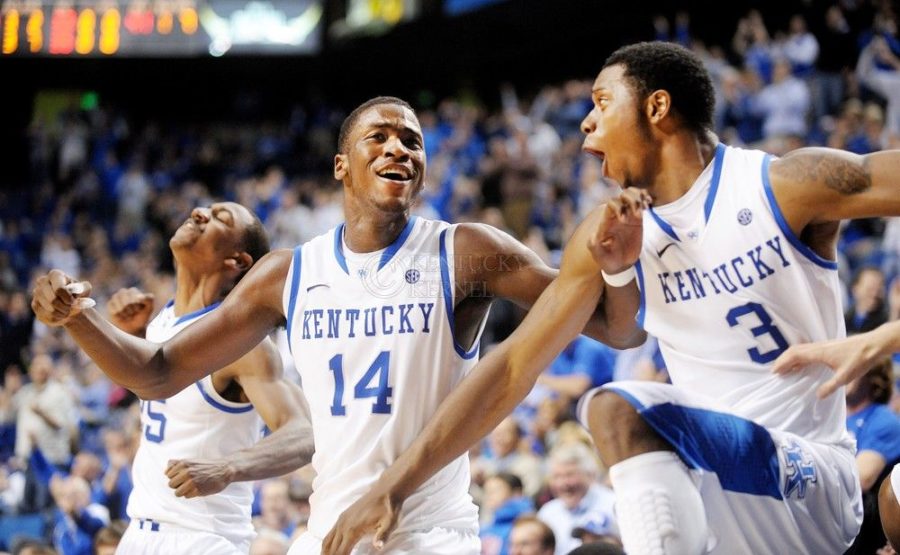 Kentucky Wildcats bench goes wild after a play during the second half of the University of Kentucky Men's basketball game against Radford at Rupp Arena in Lexington, Ky., on 11/23/11. Uk led the game at half 88-40. Photo by Mike Weaver

1. Turnovers — UK committed only four turnovers against Portland, but that performance wasn’t indicative of the whole season. The Cats have 79 on the season. St. John’s, a team with an equal amount of youth, have 94 in one more game than UK. Both teams also get after turnovers: UK has forced 87, while the Red Storm has forced 108. “They will try to steal every ball, dive on the floor, take charges,” head coach John Calipari said. Speaking of drawing fouls, that’s the one thing St. John’s does best: draw fouls and avoid giving them. They’ve taken 204 foul shots and conceded 85. UK’s split is 149-92.

2. Rebounds — This has grown into a potential area of concern for UK, drawing constant disapproval from Calipari after games. The Red Storm, meanwhile, are out-rebounded by four per game and allow opponents to grab 39.3 percent of their available offensive rebounds. If there’s a game to have UK kill its opponents on the board, it’s this one.

3. Confidence boost — We all know what comes Saturday. I don’t think UK will be overlooking St. John’s, but a solid win will help propel UK into the matchup with North Carolina, which is coming off a three-point win over a Top 10 Wisconsin team. Calipari said Wednesday that the process of growing his team is “as much mental” as anything else. “I have to build them up,” Calipari said. “You have to make them feel, ‘We’re as good as anybody.”

Opposing player to watch: God’sgift Achiuwa. Partly because he’s averaging 11.3 points and 6.6 rebounds per game, but mostly because he has the best name in all of college basketball.