Tennis advances to round of 16 in National Indoors Championships UK rolled to a 6-0 record on Saturday, defeating No. 22 Tulsa 4-1 in the Intercollegiate Tennis Association Kickoff Weekend.

By winning against Tulsa, the Cats advanced to the round of 16 in the National Indoor Championships for the third straight year.

Overall, it’s the fifth straight round of 16 the Cats have made, including the past two indoor tournaments and their outdoor appearances over the last couple seasons.

The deciding match of the tournament didn’t involve Eric Quigley or Anthony Rossi, as would be expected — it involved sophomore Alejandro Gomez, who’s ranked No. 111 in the nation.  Gomez’s big win on the final day of the kickoff weekend clinched the match for UK.

After splitting the first two sets against Tristan Jackson, Gomez suddenly went on a roll, dominating the third set with a 6-0 victory.  The score of the match was 6-3, 3-6, 6-0.

While there’s no doubt Gomez was impressive, he wasn’t the only one.  His match may have been the biggest, but his teammates were rather impressive also.

Tom Jomby was the team’s fourth winner, while Alex Musialek and Panav Jha didn’t finish their matches (both were winning their respective games when play was halted).

UK remains undefeated on the season, and it has been a great beginning for a very promising team. 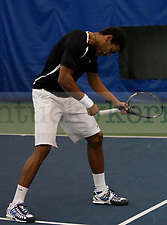 Cedric Kauffmann, UK’s associate head coach, was especially proud of the sophomore class, saying he was “particularly happy” with how the sophomore athletes had been performing.

Since 2009, the Cats are 47-9 on their home court, making a big statement to other teams coming to town.

The team won’t continue into the National Championships’ round of 16 until Feb. 17, but in the meantime, the Cats will play host to Pepperdine noon on Sunday.