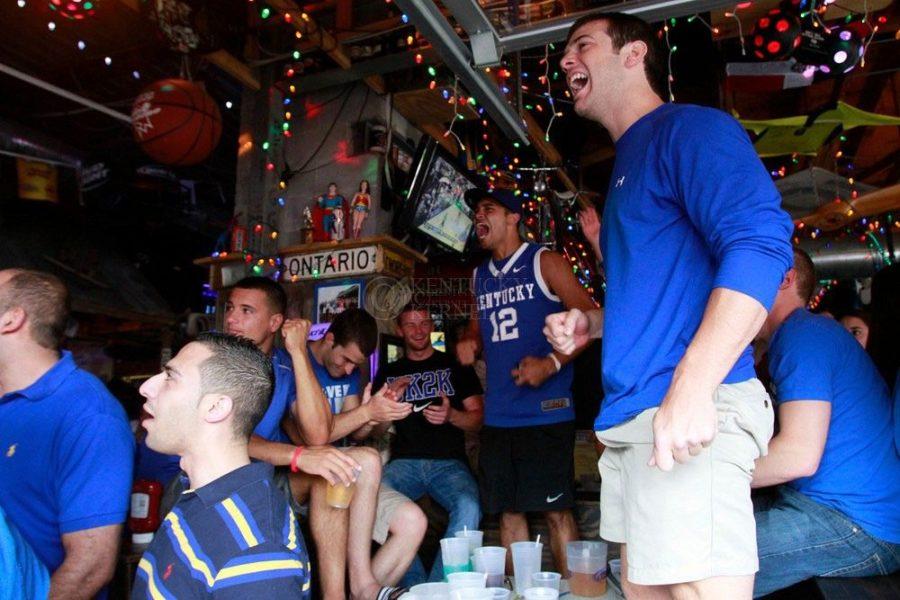 A chorus of chants to the song “All I do is Win” rang through Tin Roof when it became clear the Cats made it to the Final Four.

Steve Rader, who popularly goes by the name “Radar,” said he is a huge fan of watching games at Tin Roof.

“I’ve been to the Final Four and it’s a blast here like it is there,” he said. “Tin Roof’s awesome.”

He said he might miss celebrations at the bar for the Louisville game.

“I might be driving a group of girls who graduated two years ago down to New Orleans,” he said.

Student Government senator Scotty Stutts was decked out in a blue blazer and bow tie. He walked around with a megaphone he had bought from a police supply store.

“I’m the cheerleader for the Cats fans at Tin Roof,” he said, “I’m getting the crowd pumped up.”

A group of men sold T-shirts on the patio that read: “Louisville doesn’t exist.”

While some fans bought new shirts, others lost theirs.

“Half a beer and my shirt got ripped off clean by some girl,” Dave Noble, a law school student, said.

MBA student Jack Irvin said he had a dream about this win two years ago.

“I told my fiancee the two most important things in life are her and Kentucky basketball,” he said.  “Two final fours in a row could not be a better situation.”