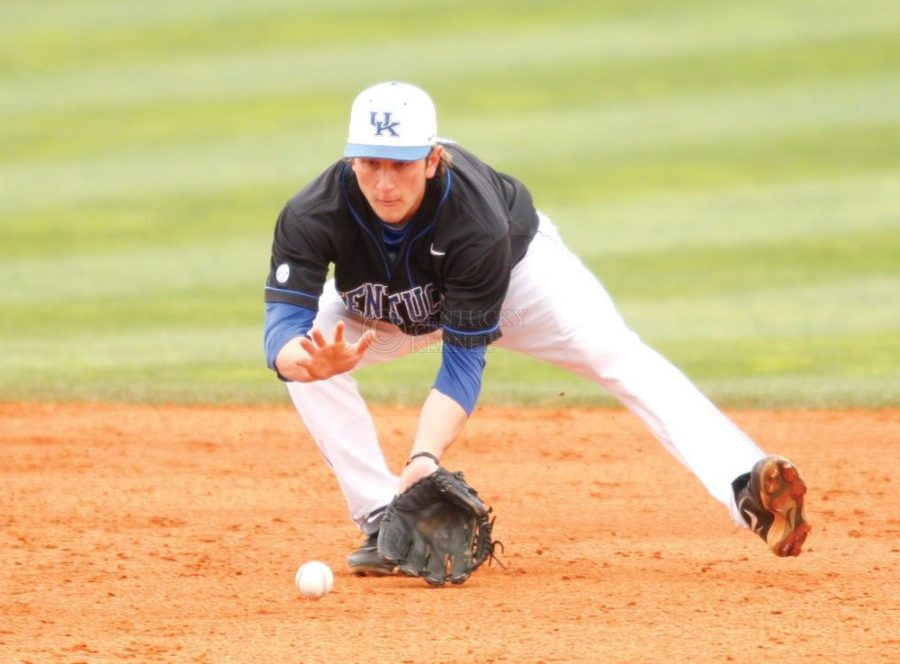 The UK baseball team fought back from a Friday loss to take two of three from No. 1 LSU last weekend at Cliff Hagan Stadium.

It was a battle of the top two ranked teams in the country, and the atmosphere showed.

On a cold weekend, the crowd still turned out in bunches. The weekend totaled a school-record 9,496, more than a thousand more than the previous high mark.

“I personally appreciate the fans coming out,” UK head coach Gary Henderson said. “It makes it easier on us. This is a fun team to watch.”

Friday night the Tigers came out quickly, scoring two in the first on two UK errors. After three straight hits to start the fourth inning, the Cats tied the game at three.

But LSU came back with a two-RBI double in the fifth to take a lead they would never relinquish. The Tigers won game one 5-4.

But Saturday, the Cats flexed their offensive muscles. Up 2-1 entering the fourth, UK broke it open with a three-run home run off the bat of freshman Austin Cousino, who struck out five times the night before.

“I definitely lost a little sleep over it,” Cousino said. “It’s something I’ve never done in baseball but you’ve just got to shake those off. Every other player on the team had confidence in me.”

A two-run home run in the seventh by junior Luke Maile, his team-high eleventh of the year, gave the Cats an 8-1 win.

Junior Jerad Grundy gave up just one run in six innings to send it to a series-deciding game on Sunday. The winner would likely be ranked No. 1 in Monday’s new polls.

A big crowd came out as Anthony Davis threw out the first pitch to a barrage of cheers and pictures. And the Cats came out to play as well.

A home run in the second inning from the NCAA batting leader, Raph Rhymes, put the Tigers up one, but the Cats got it back quickly.

A two-RBI double by freshman A.J. Reed followed by an RBI single by Maile gave the Cats a 3-1 early lead.

And after LSU tied it on the top of the fourth, junior Zac Zellers hit the first pitch of the bottom half over the left field wall to re-take the lead at 4-3.

But Rhymes struck again with an RBI double in the sixth to tie the game. After going 4-4, the junior increased the nation’s best average to .500.

Another single in the sixth plated the go-ahead run for LSU, chasing UK starter Corey Littrell in the process.

Yet again, the Cats answered. Three RBI doubles in the bottom of the inning put the home team up 7-5, a lead they wouldn’t relinquish.

The UK bullpen gave up its first run in 21 innings in the eighth, but it wouldn’t be enough for the Tigers. The Cats won 7-6, coming from behind to win the series and most likely garner the No. 1 ranking.

UK has now won each of their first six SEC series, a conference Henderson said is the “best in the country.” Four out of the last five of those series wins have come after a game one loss.

“I think that says we have a pretty talented group of guys that knows how to win,” Maile said. “Everybody has contributed in one way or another.”

The Cats (35-6, 13-5 SEC) will go on the road to play Louisville on Tuesday, looking to avenge a loss from the Cardinals two weeks ago. First pitch is at 6 p.m.