Outgoing president Fielden takes SG back ‘to its roots’ 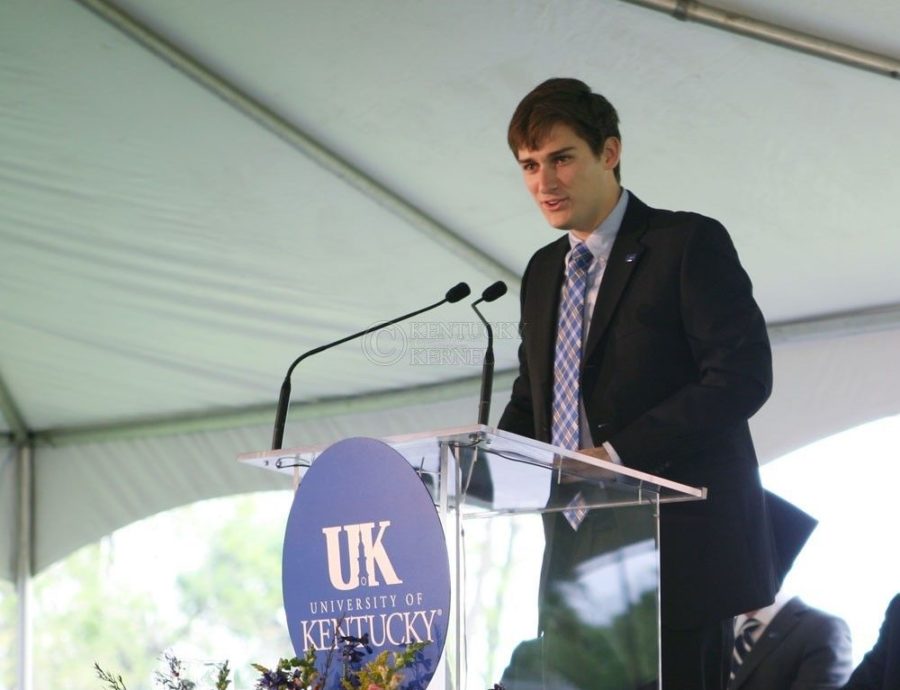 Four years ago, Micah Fielden was registered for classes and ready to attend the University of Miami. But during his last week in his hometown of Lexington, he decided to give UK a shot.

After a four-hour tour and seeing the agricultural biotechnology program, he changed his mind.

“I’ve had an amazing experience here,” said Fielden, the outgoing student body president. “I wouldn’t have gone anywhere else.”

For Student Government this year, it wasn’t about creating new, large programs. It was about focusing on its mission.

As this year comes to an end, the new Student Government staff members will transition into their positions, including incoming president Stephen Bilas.

While students are preparing to move on, Fielden is, too.

“I think a year in office is a good thing to have, then you need to elect new people and get a fresh perspective,” Fielden said. “With one year, there’s really not a ton you can do.”

Fielden said that’s why it is important to be focused on what needs to be accomplished.

“I tried to be cautiously optimistic about getting a lot done,” he said.

In the past few years, administrations have created big projects that people can see, Cox said. Though he said that isn’t bad, “I think they kind of lost their way when it came to governmental relations.”

This year’s administration made sure they improved major programs, “but they weren’t going to necessarily add a huge program because they really want to get back to their roots,” Cox said.

From implementing the Wildcat Interest Group, to rallying in Frankfort for higher education as well as in Washington, D.C., Student Government has been active in state and national politics.

“I think both Micah and I wanted to use this opportunity to be transparent and represent students,” Vice President Nikki Hurt said. She said it’s a reason why they created Wildcat Interest Group.

Cox said Fielden has had more of a presence in the political realm, such as hosting the gubernatorial forum.

“I think that this administration really understood what the purpose of Student Government is, which is to provide services and programs and really be the voice of the students,” Cox said.

The best thing the administration has done this year, he said, is returning to being a representative body.

“It’s hard to make everybody happy, but I think they did a much better job this year of living their actual mission statement,” Cox said.

A lot more goes into being student body president than one might think.

Fielden represented students as a member of the Board of Trustees, working with more than 20 influential individuals who make decisions for the university.

He also is the face of the student body to the community. He is present at public events, ranging from the recent groundbreaking of the New Central Residence Hall, to being a leader at the Rally for Higher Education, or by encouraging students to stay safe during Final Four celebrations.

“He really tried to advocate for the students,” Hurt said regarding Fielden’s role on the Board of Trustees and in Frankfort.

Having similar interests and the same major, Hurt said they made a good team.

“We were able to build off each other’s strengths,” she said.

“I would like for (students) to remember that SGA was an open environment where if you had a question or idea or concern you could come talk to us,” Hurt said.

She thinks that Fielden has done a great job, and said he will be successful no matter what he does.

“He’s really passionate about what he does, and I think that’s evident,” she said. “He is already a hard worker and he really tries to make a difference in the lives of UK students.”

Last semester, Fielden also was the president of Delta Sigma Phi fraternity. He said that was the hardest semester he has ever had.

After graduation, Fielden will be taking a year off to do an internship and then will apply to law school.

Fielden said he will miss “just the whole college feel,” after he graduates, but he is ready.

This summer, Fielden will return to Haiti, where he and his family have been doing service work for most of his life. There he will teach English and meet two new students who will come to UK through the Kentucky Haiti Partnership, a 501(c)3 non-profit organization.

Earlier this year, Fielden was involved with bringing students Pedro Jean-Baptiste and James Blanc to UK from Haiti through the program.

He said it was one of the top moments of the year.

Another accomplishment Fielden noted was helping found the National Campus Leadership Council. Fielden currently serves on the executive committee of NCLC, which represents a little more than 2.5 million students.

The council helps facilitate communication among students with policymakers.

“The goal of it is to represent the student opinion to the lawmakers at the White House,” Fielden said.

Cox said the position of president and the power and influence that comes with it can often go to presidents’ heads.

“I think the best thing I’ve seen with working with Micah is that it never has,” Cox said. “He continues to, at the end, remain humble.”

From the first time they met, Cox said he has been impressed with Fielden.

“He wants to be a better version of himself,” he said.

Fielden is willing to accept feedback, he said, and asks those around him what he can do better.

“I think that’s a real testament to someone’s character and maturity,” he said.

Cox said he has seen that Fielden has Student Government’s best interest at heart.

“He still is the same person he was a year ago, from the perspective of an everyday student,” Cox said.