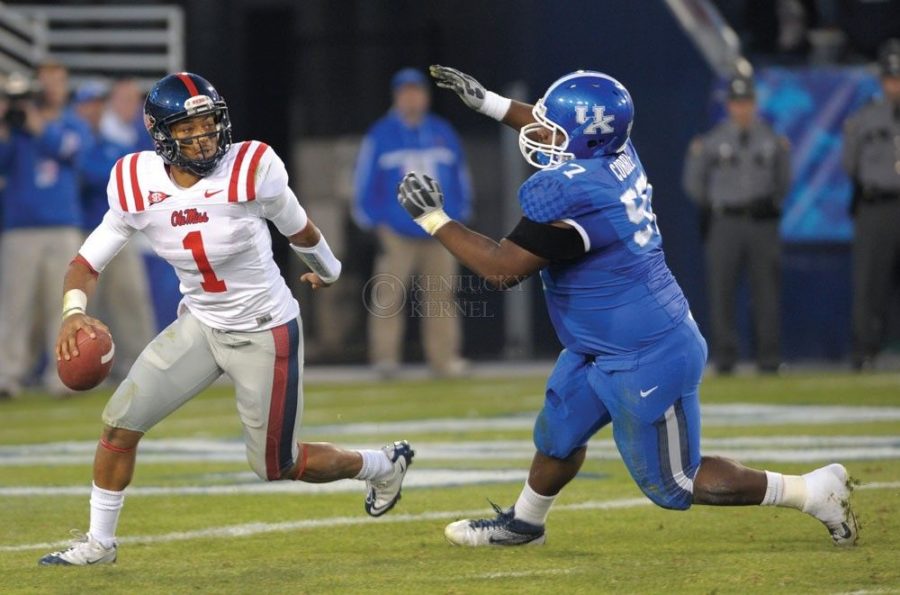 An argument could have been made last season that the UK football team had no true strength.

Sure, the Cats had linebacker Danny Trevathan and safety Winston Guy, but their positions weren’t going to make or break the season.

It was supposed to have been an experienced offensive line that was going to help make life easier for an evolving offense. That wasn’t the case, as we now know.

As summer practices turned to fall camp, it began to take shape that a large and experienced defensive line was only getting better with the addition of some quality recruits, notably freshman Thomas Chapman and Patrick Graffree.

Senior defensive end Collins Ukwu said the line has to continue to be “consistent and practice.”

“I feel like we’re getting close to that consistency level,” he said. “Our coach tells us all the time to just keep getting better and better everyday.E.D.D., that’s kind of our motto, just every damn day, that’s what that stands for.”

In being consistent, Ukwu along with junior tackle Mister Cobble know they must be role models, as Phillips indicated they would be.

But it was Ukwu who was named the team’s defensive captain on Friday, which is something he doesn’t expect to change his mindset.

“My leadership role hasn’t changed. Even with the title or without, I just feel like I would be the same regardless,” he said. “It reflects me and how my peers feel about me in general.”

One of those peers, Cobble, said he attributes the defensive improvement to them coming together.

“I feel like with this defense we have, we have come together a lot more because we understand a lot more,” he said.

The likes of Chapman and Graffree, along with junior tackle Tristain Johnson, sophomore Christian Coleman, sophomore Alvin Davis and redshirt freshman Farrington Huguenin, are among those who can benefit from that camaraderie.

“They’ve learned quick so it was an advantage for them being here early this summer and getting to know everything, so it really helped us a lot,” Ukwu said about the inexperienced players on the line.

“They’ve come along really strong. We’ve made a lot of good strides. There weren’t really any setbacks this summer.”

Cobble said he believes all they need is time to develop and make the transition into the roles they were recruited for.

Accompanying the two upperclassmen at the defensive end and tackle positions are senior Taylor Wyndham and junior Donte Rumph. After originally signing with UK in 2008, Rumph worked through two years of additional schooling to obtain eligibility.

Once on campus in 2010, he posted 12 tackles in 12 games. A season later he again proved his work ethic in getting the nod to start in seven of the 11 games he played for the Cats. Among those, he set his career high with six tackles against LSU.

Wyndham had been an on-again, off-again starter since his redshirt freshman season in 2009, with the six he started in 2010 being the most of any season. In his time at UK, he has compiled 69 total tackles and 4.5 sacks.

Although already here at the time of defensive coordinator Rick Minter’s hiring, much of the experience on the defensive line fit Minter’s idea of “building (the defense) one brick at a time.”

“Why does a young player play? It is either because of poor recruiting in front of him, or he’s a great player,” Minter said. “At Kentucky, you may not get a ton of ‘great’ players off the recruiting wire, you get a lot of development players — players that come in and turn out to be great. We have to develop players to be successful.”