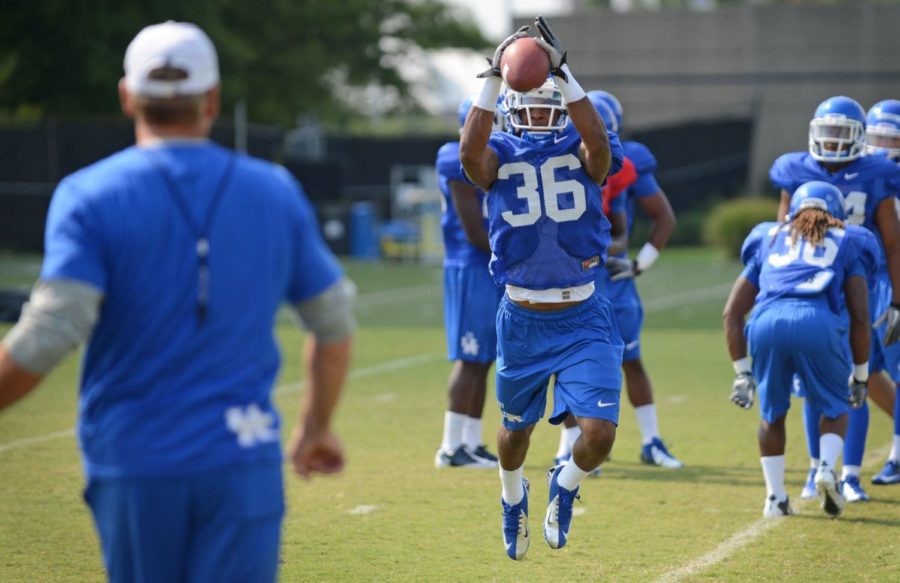 Position battles are a part of the preseason experience for any football team hoping to be competitive in the fall, and UK’s football program is no exception. But less than two weeks away from the 2012 season opener in arch-rival Louisville’s backyard, the Cats still face question marks at a number of key positions.

Competition for a starting nod can bring the best out in a player, but it can also be detrimental to the team. As the regular season draws closer, players and fans alike want to know who will be on the field this season, but so far, few questions have been answered.

In the team’s annual spring game, offensive coordinator Randy Sanders featured a wide-open offense that included spread formations and a no-huddle tempo. It remains to be seen if that is the offense seen from UK this fall or if it will regress back to its conservative, run and screen-heavy roots. Regardless, the greater issue is the lack of a presence to command that offense.

On Monday the team announced that Sophomore Maxwell Smith would start at quarterback for the team’s season opener in archrival Louisville’s backyard. Smith started three games last year and appeared in eight en route to being named to the SEC All-Freshmen team. But with less than two weeks until the start of the season, players and fans are forced to wonder if the decision was made too late.

Having worked with Smith, senior Morgan Newton and freshmen Patrick Towles and Jalen Whitlow all competing for the starting nod throughout training camp, the rest of the offense now has an abbreviated time period to find a rhythm with Smith on offense.

“It’s a little difficult, just for now, because we have to work with every quarterback and just get the timing down and chemistry with each one,” senior wide receiver La’Rod King said. “But at the same time once one is determined then it is a little easier on us because you have first string and second string, and those are the only guys you really work with.”

Despite the quarterback position being cleared up, even more uncertainty lies throughout the rest of the depth chart. The offensive line features three new starters who combine for less than a season’s worth of starts in their careers. Behind them lies even more inexperience, making the line very vulnerable should it suffer injury problems, especially in a pass-first offense.

Three running backs assumed the starting job throughout last season, and all three return looking for playing time in the fall. Sophomore Josh Clemons, senior CoShik Williams and junior Raymond Sanders are all trying to show that they have the talent to be a breakout running back in the SEC much the way former UK running back Derrick Locke did two seasons ago. Sanders is the best blocking running back, while Williams is the quickest of the three. Clemons may be the most true running back with all the intangibles needed to be successful, but he also returns from a knee injury that sidelined him for the final two-thirds of last season.

“We’re just going to follow the coaches’ gameplan, whatever it may be,” Clemons said. “If I’m going to be one of the running backs they want to use then you will see me out there. What I do know is the coaches are just trying to find a way to win.”

No one doubts the coaches are doing what they’re doing in an effort to win, but at what point does the uncertainty begin to bother the team more than its opponents? Just 12 days from the start of the season, head coach Joker Phillips and his staff may be toeing that line.

The defense continues to adjust on the fly with the loss of starting cornerback Marcus Caffey and the move of starting safety Martavius Neloms to replace him. With even more uncertainty at the key positions on the offensive side of the ball, the Cats seem underprepared for the start of a critical season in the Joker Phillips regime. Whether the talent is there or not, as long as important decisions continue to be put off, the Cats may not be able to move forward.