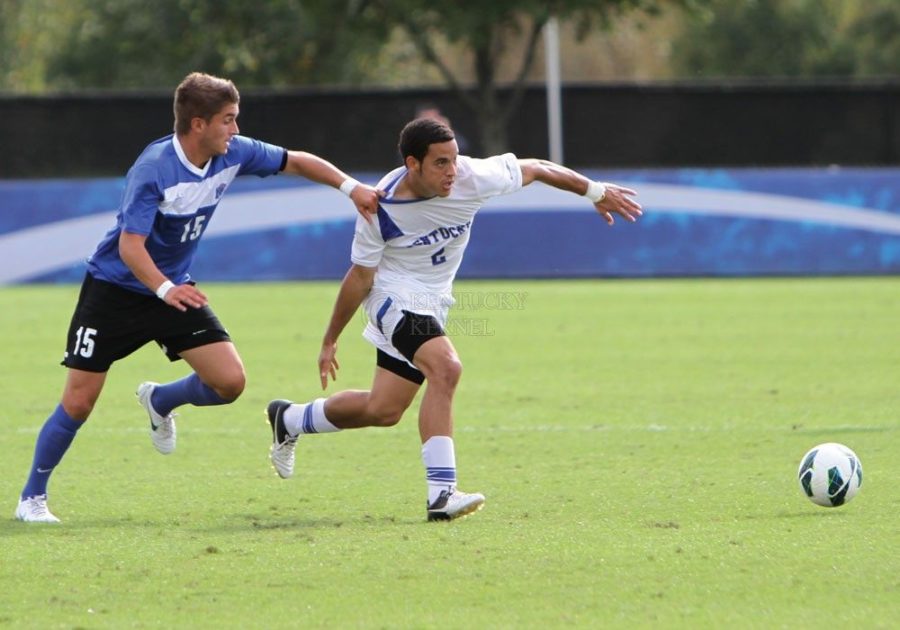 Junior Tyler Riggs thought he’d scored the golden goal winner for UK in the final seconds of overtime, but his celebrations were short lived as his late effort was ruled out for offside.

Despite picking up a point in the first Conference USA game of the season, UK head coach Johan Cedergren was not pleased at his side’s sloppy start to the game.

“Today was the first time so far that we felt like we took a step back,” Cedergren said. “That first half was unacceptable.”

“We all have a goal that we want to get to, and if we’re going to get there, that kind of first half is unacceptable,” he said.

After a fiesty start, Memphis took the lead amid controversial circumstances in the 18th minute.

A free-kick on the right wing saw UM’s Liam Collins float a cross into the penalty area, which senior Matt Lodge attempted to clear.

Following heavy contact with an attacking player, Lodge went down hurt leaving Mark Sherrod unmarked to collect the ball and poke it across the line to put the visitors 1-0 up.

Lodge dusted himself off to fire over UM ‘keeper Connor Hurley’s net as UK looked to get back into the game, however the Tigers held onto their one goal advantage heading into the half-time interval.

Both teams had chances to score as the second half opened up, with the visitors looking likely to add to their lead.

A diving save from freshman ‘keeper Jack Van Arsdale after the hour mark flicked the momentum switch as UK turned things up a gear as they bid to find an equalizer.

Moments later, Jacob Kemper picked out fellow senior Charley Pattys on the left, who found Riggs alone in the box to twist home and find the bottom corner to tie the game at 1-1.

Less than two minutes later Pettys fired the Cats into the lead.

Good work from Riggs on the right saw him pull back to Pettys, who composed himself amid the panicking defense before slotting home to put UK 2-1 in front.

“You can see the belief, they kept playing and they kept doing things,” Cedergren said of his team’s comeback.

Another diving stop from Van Arsdale in the 71st minute helped to preserve UK’s lead as a stunned Memphis squad looked to get back into the game.

But there was nothing Van Arsdale could do on 77 minutes as Benjamin Ciosanski’s shot from the edge of the area deflected off a body in the box before nestling into the bottom corner to make it 2-2.

Neither side found the net in the closing minutes, taking the game to overtime.

Senior Cameron Wilder cleared off the goal line from Sherrod’s header as OT got underway, before Riggs went close for UK at the other end.

Sherrod wasted a glorious chance when he headed wide from two yards out on 107 minutes, before Riggs thought he’d won it with seconds to play.