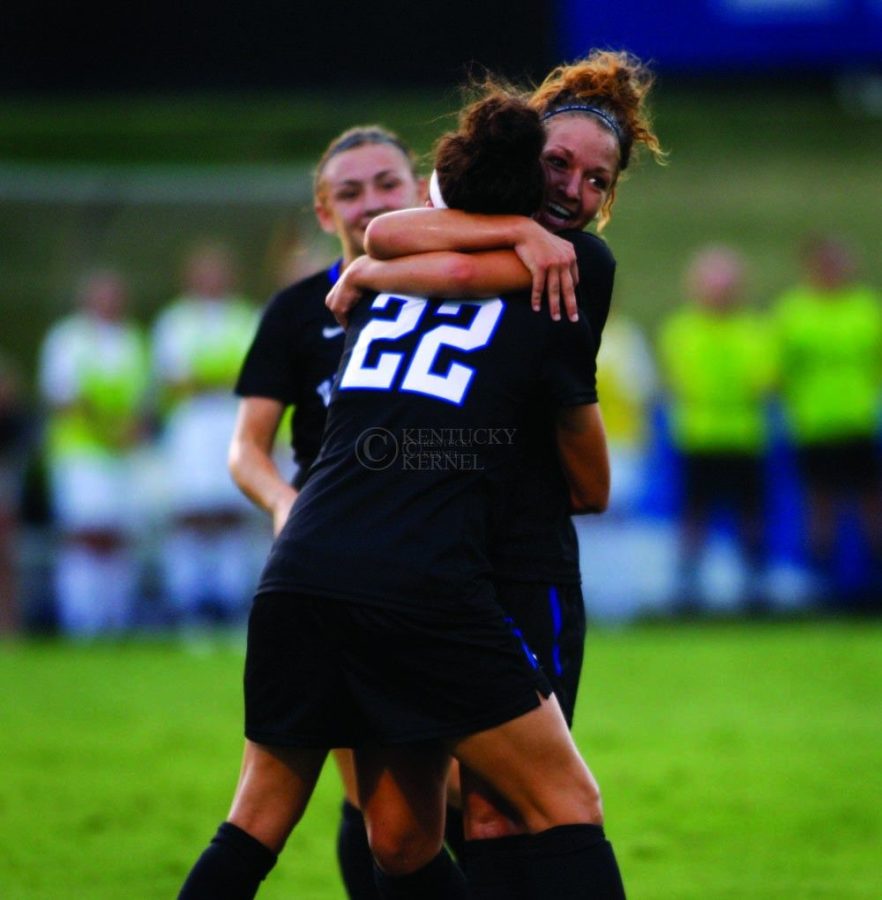 Goals on either side of halftime from Cara Ledman and Natalie Horner were enough for the Cats to ease past the Spartans at the UK Soccer Complex.

The 2-0 victory sends UK to 3-0 on the season and 1-0 in the Tropical Smoothie Invitaitonal.

UK controlled the game from start to finish, with a particularly impressive performance from the defensive back four, led by senior midfielder Alyssa Telang.

Solid positioning, intelligent reading of the game and strength up against the opponent helped UK grab their second shutout of the season.

“The past week our back-line has been working on trying to be a unit and shifting together,” Telang said.

“We have a lot of talented players in our back-line and today we played together as one, it was like we were one player.”

UK head coach Jon Lipsitz was understandably pleased with the all-round performance from his team.

UK started the game brightly, attacking Greensboro from the off and it didn’t take long for the Cats to first trouble Jamie Simmons in the UNCG goal.

A ball by Telang from her own half saw freshman forward Cara Ledman send junior forward Caitlin Landis in on goal only for the latter’s toe-poke to drag wide of the post.

Transition soccer from the defense through midfield into attack, quickly became the theme of the night for UK, who began to take control of the game.

Another ball from Telang to Ledman minutes later gave junior midfielder Danielle Krohn a chance to open the scoring, before a last ditch sliding tackle from Jordan Draughon broke down the move.

But UK fans didn’t have to wait much longer to celebrate, as the home team went 1-0 up in the 14th minute.

Sophomore defender Arin Gilliland won possession in midfield before threading the ball to Landis on the left flank who saw the run of Ledman and zipped a perfect through ball past the last man for her teammate to run onto. Ledman sprinted into the Greensboro box, composed herself and then slotted past the rushing ‘keeper low into the bottom corner to fire UK into the lead.

Landis chased down the ball as Simmons came rushing out of her net, however, her shot was smothered by the oncoming ‘keeper.

The home defense continued to frustrate opposition players with their play, reading passes before they were made and constantly darting in front of Greensboro players to intercept each time a ball was played forward by the visiting midfield.

Unable to break down the UK defense with passing, Greensboro’s best chance of the half came on a superb individual run by substitute Nitang Jones, who beat two players before her long range effort sailed high over junior Kayla King’s goal.

Excellent link play down the left between Telang, and UK subs freshman midfielder Jackie Dellaire and senior forward Kirsten Robinson caused a handful of problems for the Greensboro midfield as the first half drew to a close.

Robinson came close to putting the home team up 2-0 moments before halftime after her rundown the left wing resulted in menacing cross-come-shot being tipped over by Simmons.

UK’s penetration of the Greensboro defense would have led to more than a 1-0 lead at the break were it not for Simmons not rushing out to break up multiple through balls into the feet of Landis and Ledman.

After the break Greensboro came out fighting straight from the opening kickoff with Tabitha McHale bolting towards the UK penalty area, only for Telang to slow her with tough defense.

UK soon re-established their superiority in the match with another passing move starting at the back with freshman midfielder Olivia Jester playing to freshman forward Kelli Hubly down the left before feeding the lively Krohn, who was cut down by Chesney White 30-years from goal.

Junior defender Ashley VanLandingham, already with two goals on the young season, took the resulting free-kick, however, unlike against Eastern Kentucky last week, this time her effort flew into the student section behind Simmons’ goal.

Greensboro continued to press, however, they struggled to find a way past the UK defensive line, with Cat Barnekow firing wide from distance.

As the second half wore on, UK continued to play textbook soccer with patient passing amongst the back four waiting for a midfielder to drop deep to collect, before heading up field looking for an open team mate to rush towards the Greensboro net.

With 60 minutes on the clock another gorgeous move beginning at the back led to Hubly knocking into Landis outside the box, with the striker using her skill to beat Lauren Hein before unleashing a shot that sizzled inches past the right hand post.

The Hubly-Landis combo wasn’t done there, seconds later the former once again sent the latter free into space with Landis firing a cannon from an angle, which smacked the left post before bouncing to safety.

Five minutes later and UK again came close to extending their lead when Gilliland launced a rocket from 35 yards that was destined for the top left corner before Simmons acrobatically tipped it over for a corner.

Surely it was only a matter of time before the Cats would move 2-0 up, with Greensboro unable to take more than a few touches of the ball before a black jersey would close in and swallow possession.

With only a one goal lead and their backs against the wall, Greensboro began depending on counter attacks for a sniff of goal, however each time they strode forward they once again ran into the on-form UK defensive line.

Senior forward Natalie Horner got close with a header at one of the many corners UK forced in the second half, but still they couldn’t find that elusive insurance goal.

In the 83rd minute the second tally finally came and it was Horner who found herself on the scoresheet.

Krohn drilled in a cross from the right wing onto the penalty spot and Horner turned it home to put the points in the bag for UK.

Next up for the Cats is Southeast Missouri on Sunday to close out UK’s first tournament of the year.

“This is the first time we’ve played Friday/Sunday so it’s all gonna be about recovery right now,” said coach Lipsitz of the short turn around.

“The key is to possess the ball, if we come out sunday and we’re chasing the ball we’re gonna feel (tonight’s game) very quickly, he said. “If we’re keeping the ball and we’re knocking it around we’re gonna be pretty happy with how we feel,” he said.