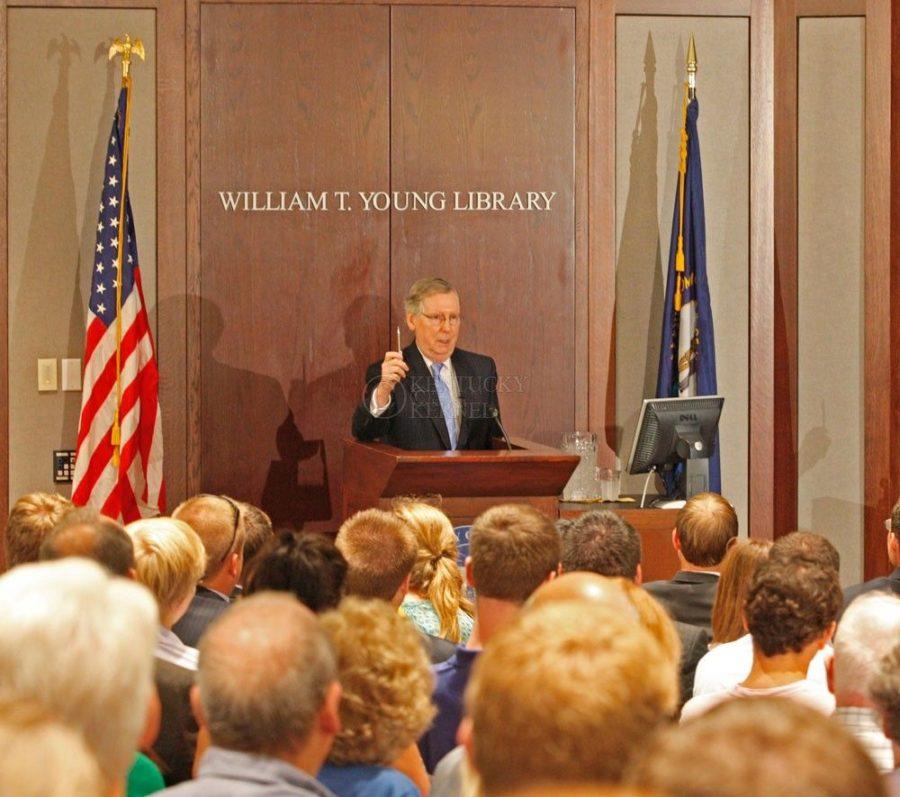 “Now, President Obama and Gov. Romney should be thankful that our election campaign is far from that.”

Besides comparing past elections with the present, McConnell told the audience what he expects out of a U.S. leader after serving under five presidents.

“I like presidents who are willing to stick their necks out from either party,” he said. “We are going to need a great president in the next four years.”

Although the Kentucky College Democrats did not attend the speech, Shea Henning, the president of the organization, was available for comment.

“It’s sad that his No. 1 priority is making Obama a one-term president rather than supporting Kentucky constituents, as well as Kentucky and the nation,” she said.

Sen. McConnell has made headlines lately because of his speech at the Republican National Convention in Tampa, Fla.

“America is about to turn the page on Barack Obama’s four-year experiment in big government,” he said in his speech.

The Republican senator gave his personal opinion on Thursday of Clay, who he claims is among his favorite Kentuckians.

“I must confess here at the beginning that I have an addiction,” McConnell said. “I have a longstanding addiction to American history, and in particular American political history. I hope some of you in the audience share that addiction.”

Elected to the U.S. Senate in 1806, Clay represented Kentucky. But he found the life in the Senate boring.

“Clay always wanted to be where the action was,” McConnell said.

Clay was elected to the U.S. House of Representatives in 1810, “where the action was” at that time.

UK President Eli Capilouto expressed his excitement over McConnell’s visit to UK while introducing him.

“This is part of nurturing a vibrant college campus,” he said. “This is a place that offers the opportunity to engage with national leaders, to gain from their wisdom, insight and expertise.”

“He’s been traveling and it’s always good to have him here,” he said. “He’s a well-known Cards fan because his undergrad was Louisville, so it’s tough to get him here sometimes.

“It’s always good to have him on UK’s campus.”