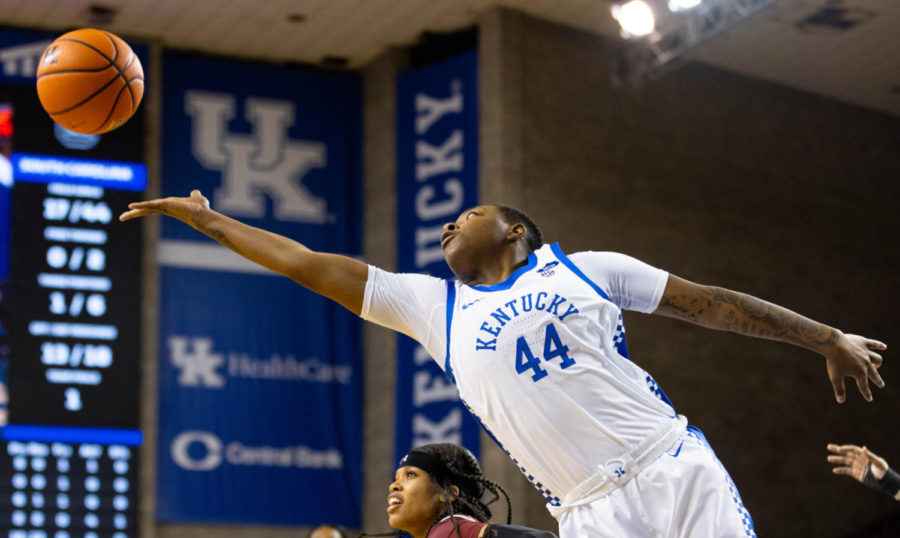 The winning effort was primarily on the back of junior forward Dre’una Edwards, who recorded 24 points and seven rebounds on the day.

In beating Alabama, Kentucky has ensured that both of its wins in its ongoing 2-8 stretch have come on the road, after beating Auburn 67-55 in late January.

“A win is what we needed,” Elzy said. “It’s tough to get a win in the SEC, no one’s going to give us anything, we’ve got to earn it. We earned it today in Alabama. We’re going to celebrate this.”

Elzy’s optimism likely stems from the fact that, for just the second time since its’ 84-58 loss at then No. 5 Tennessee, Kentucky had nine healthy and dressed players to utilize.

The biggest factor contributing to Kentucky’s recent woes has been injuries and absences, including notable losses such as Robyn Benton, Jazmine Massengill, Jada Walker, Treasure Hunt and Edwards for different periods of time throughout the stretch.

Kentucky’s first game back to a full roster saw the Cats lose by single digits to No. 1 South Carolina, a team it had previously lost to by 20 points. Getting a win in Tuscaloosa likely reaffirms in Elzy’s mind exactly what she said following Kentucky’s loss at LSU on Jan. 30:

“We’re going to be a dangerous team when we have all of our pieces in place.”

With nine players taking the court at different times against Alabama, every Wildcat recorded at least two points, including Emma King and Nyah Leveretter who benefited most from Kentucky’s injury woes, seeing their minutes increase tremendously.

Leveretter, for her part, even managed to maintain a fair amount of those minutes against Alabama, playing 13 minutes and scoring eight points with seven rebounds.

“A lot of it has to do with the past games where we had to step up,” Leveretter said about her performance. “For a lot of us our confidence has gone up tremendously, so subbing out there tonight we had nothing to lose and just laid it all on the floor.”

While King finished the game with just two points, she contributed in other ways, namely on defense, which allowed her to finish with a plus-minus of plus-nine.

“Emma [King] has been solid in what we need,” Elzy said. “Obviously it’s not filling up a state-sheet but it’s the intangibles. We asked her to step up, play hard defensively, take charges, make shots when we need them, and play confidently on the floor. She did all of that I thought.”

Kentucky will look to continue its winning ways on Tuesday, Feb. 15, back home inside Memorial Coliseum for a make-up game against Mississippi State. That game is scheduled to tip-off at 6 p.m. EST.