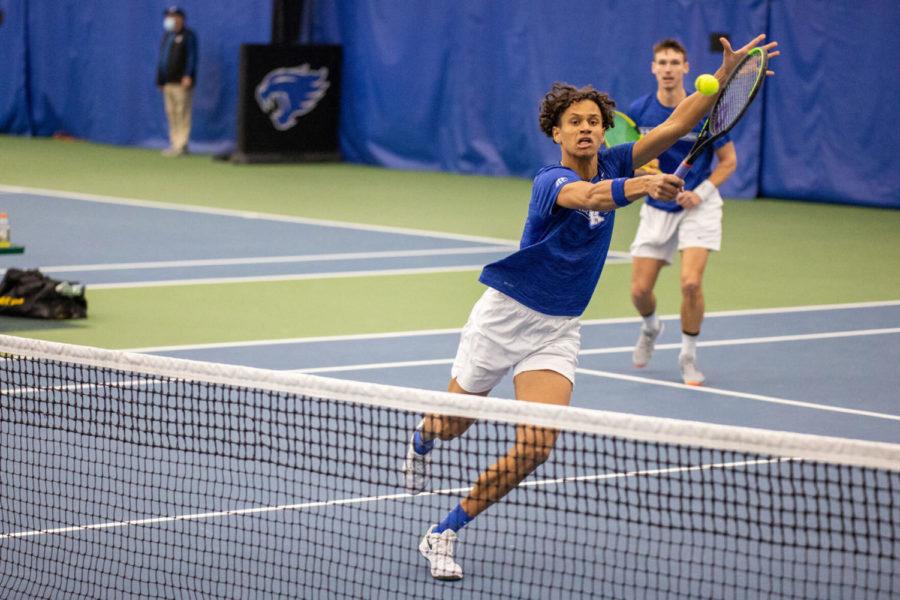 Kentucky mens tennis traveled to Seattle to compete in the 2022 ITA Division I Men’s National Team Indoor Championship. The team played three matches over the weekend, winning one and dropping two.

All the Wildcats’ matches were at the Seattle Tennis Center, with their first one taking place on Friday, Feb. 18. The tournament consisted of 16 teams across the country, all of whom were seeded in a 16-team bracket before the tournament began. The Wildcats received the No. 7 seed going into the tournament.

Kentucky went up against Southern California in the opening round. The Trojans entered the tournament as the No. 10 seed.

UK opened its time in Seattle with a dominant win, sweeping USC. Kentucky’s victory saw No. 37 Joshua Lapadat’s first ranked singles win of the year, along with wins from No. 5 Gabriel Diallo and Yasha Zemel in singles action.

Kentucky went on to play the No. 2 seed Baylor in the quarterfinals, with a trip to the Final Four on the line.

The Bears would prove to be a tough opponent, besting Kentucky 4-3. Baylor had to fight off Kentucky after leading 1-0, taking the doubles point.

Diallo and Francois Musitelli gave UK a 2-1 lead after their consecutive straight-set victories. Baylor would answer quickly and reclaimed the lead 3-2 after Millen Hurrion and JJ Mercer were both defeated in straight sets.

Tied at three, Zemel was the last Wildcat in action. After winning the first set, he was defeated 6-3, 3-6, 2-6 in a three-set thriller that knocked out the Cats from championship contention.

Baylor’s 4-3 win would force Kentucky to move into the consolation bracket of the tournament, where they would face SEC rival South Carolina in its final game of the weekend.

The No. 11 Gamecocks would prove to be too much for the Wildcats after an impressive 4-1 win.

Kentucky trailed early after once again failing to get the doubles point.

After Hurrion lost the first match in singles play, Mercer would grab a point for the Wildcats winning 6-4, 6-4 in straight sets. Down 2-1, UK wasn’t not able to find an answer, and the Gamecocks would go on to win 4-1.

Kentucky would end its West Coast trip with a losing weekend against a loaded field. UK leaves Seattle with a 9-3 record on the year, with one match remaining before SEC action gets underway.

The Wildcats will be at home in the Hilary J. Boone Tennis Center for their next three matches, and will not see a road opponent for more than two weeks until they travel to Fayetteville to face Arkansas on Sunday, March 13.

UK will play eight ranked opponents in the conference and will also take on the No. 7 Virginia Cavaliers in a match that was postponed on Friday, Feb. 4.

Northwestern comes to Lexington on Friday, Feb. 25, to face Kentucky in one last tune up before the rigorous SEC schedule begins.