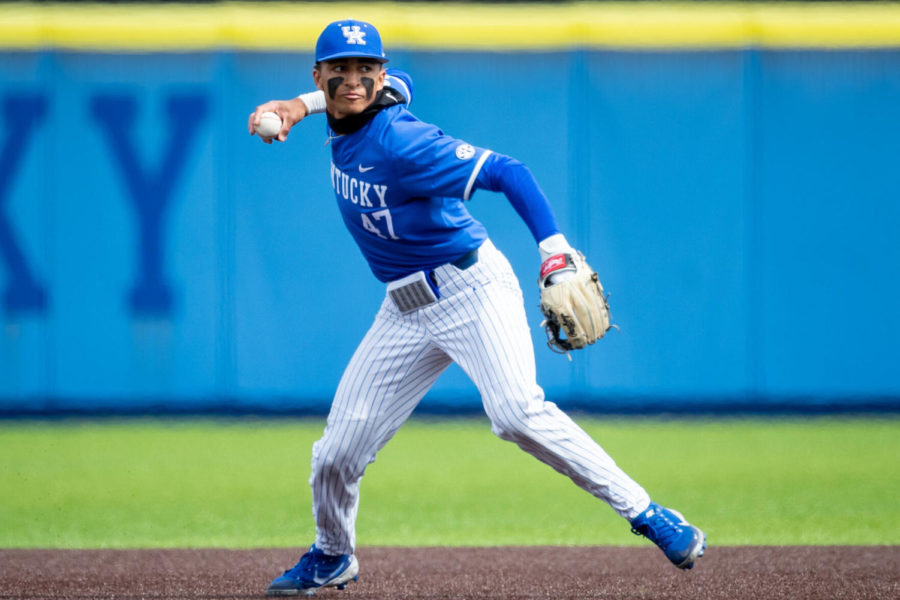 The sixth year of the Nick Mingione era of Kentucky baseball started on the right foot as UK defeated Jacksonville State 10-8 in Jacksonville, Alabama on Friday.

Cole Stupp took the bump for the Wildcats, while Reid Fagerstrom opposed him for the Gamecocks.

Kentucky was unable to crack Fagerstrom in the first, as a single from Hunter Jump was the only danger it could create.

In the bottom of the first, the Gamecocks were able to put up two runs on Stupp with two-out-hitting, but Stupp was able to get out of the jam and escape with the score at 2-0.

In the top of the second inning, Chase Estep drew a lead-off walk, which set up a two-run-homer from Oraj Anu, tying the game at 2-2.

A few batters later, Daniel Harris IV was able to score from third on a wild pitch, giving the Cats a 3-2 lead.

In the bottom half, despite giving up a lead-off single, Stupp shut the door on JSU by retiring the next three batters in order.

The third inning brought more success for the Wildcats as Estep hit a solo homerun down the right-field line to extend the lead.

In the bottom half of the third, JSU’s Alex Strachan drove home Carson Crowe to bring the score back within one.

After Kentucky went down in order in the top of the fourth, the Gamecocks jumped on Stupp, tagging him for three more runs thanks to a three-run homer by Crowe, giving JSU a 6-4 lead.

Stupp was able to limit the damage after the deep shot, striking out the final two batters, with those ultimately being the last he would face.

In the top of the fifth, Jake Peppers took over for Fagerstrom for Jacksonville State.

Though JSU had a fresh arm on the mound, the Cats jumped on Peppers with three of the first five batters reaching base.

With those runners on base, Harris singled home two Wildcats, tying the game up at six.

In the bottom of the fifth, Daniel Harper entered the game in relief for the Cats and struck-out JSU in order.

The sixth inning would bring more of the same for UK.

Ryan Ritter and Jump were sat down to start the inning, but two Wildcats reached base after, ending the night for Peppers.

Dylan Hatchcock would share similar woes with Peppers, as Estep and Anu each drove home a run, giving Kentucky an 8-6 lead.

In the bottom of the sixth, Harper could not find the same success he had in the inning prior, giving up a lead-off homerun and an RBI double to tie the game up at eight.

Tyler Guilfoil entered the game in relief and got the final out, leaving the score tied.

The seventh and eighth innings slowed down in terms of run production, as Ryan Hagenow shut the door for Kentucky, leaving the score deadlocked heading into the ninth.

Though Anu started the inning with a ground-out, Harris reached base with a walk to get Kentucky its first runner on base in the inning. Alonzo Rubalcaba struck out, being unable to advance Harris, but John Thrasher drew another walk, putting runners at first and second.

Ritter, a member of the Golden Spikes Award watch list who had been hitless prior to the at-bat, came in clutch, driving home Harris with a RBI single to left field, giving the Cats a 9-8 lead.

Jump would then increase the UK lead to two with an RBI single that scored Thrasher.

Hagenow picked up his first save of the year, sitting JSU down in order, clinching the victory for the Wildcats. The effort also accredited him with the win for UK.

Estep and Anu led the way offensively for Kentucky with Estep finishing 3-4 with a walk and two RBIs, and Anu finishing 3-5 with three RBIs, providing veteran production at the plate.

The Cats will look to keep the bats hot and improve on Friday’s win in game two of the series against Jacksonville State. That game is scheduled to take place this Saturday, Feb. 19, at 4 p.m. EST.