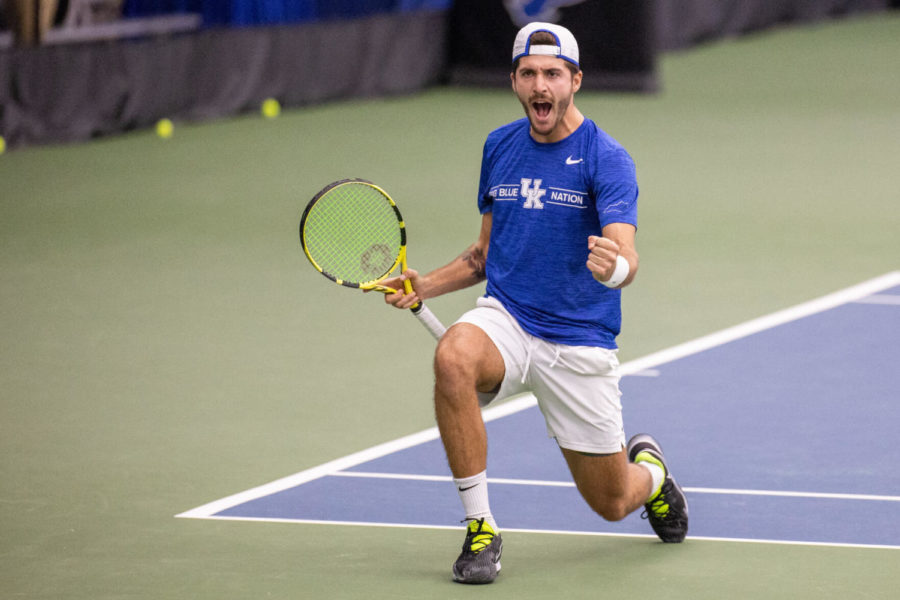 Once the Wildcats took control early, they never looked back.

The next doubles match featured Francois Musitelli and Yasha Zemel for Kentucky taking on Ryan Colby and Paul Barretto.

The pair would be challenged more than Mercer and Lapadat prior, but would still emerge victorious, winning the match 6-3 and clinching the doubles point.

Starting the singles scoring for the Cats would be junior Gabriel Diallo, who took down USC’s Bradley Frye by scores of 6-3 and 6-2 to put Kentucky up by two.

Next, on court five, Lapadat faced off against USC’s Lodewijk Weststrate.

The first set was rather easy for the Kentucky sophomore as he claimed victory 6-3, but the second set went much longer, with match point being reached twice.

Despite the close competition, Weststrate would be unable to edge Lapadat with the latter winning 7-6 to put the Wildcats up 3-0.

The success of those before him gave Zemel the opportunity to seal the win for the Wildcats, with the only thing standing in his way being the Trojan’s Ryan.

Zemel distanced himself early on in the match, winning the first set 6-3, though the tables would be flipped on him as Ryan would take the second set by the same score.

Sticking to the theme of 6-3, Zemel would win the third set by that score, making all three matches conclude with the same score, earning the win for the Cats.

The win marks the ninth of the season for Kentucky and its second in a row after defeating the Duke Blue Devils Sunday in Durham, North Carolina.

Next on the schedule, the Wildcats will face the No. 2 seeded Baylor Bears in the second round, with that matchup scheduled to take place on Saturday, Feb. 19, with the time TBD.