UK falls one point short of upset, losing 4-3 to No. 5 Florida 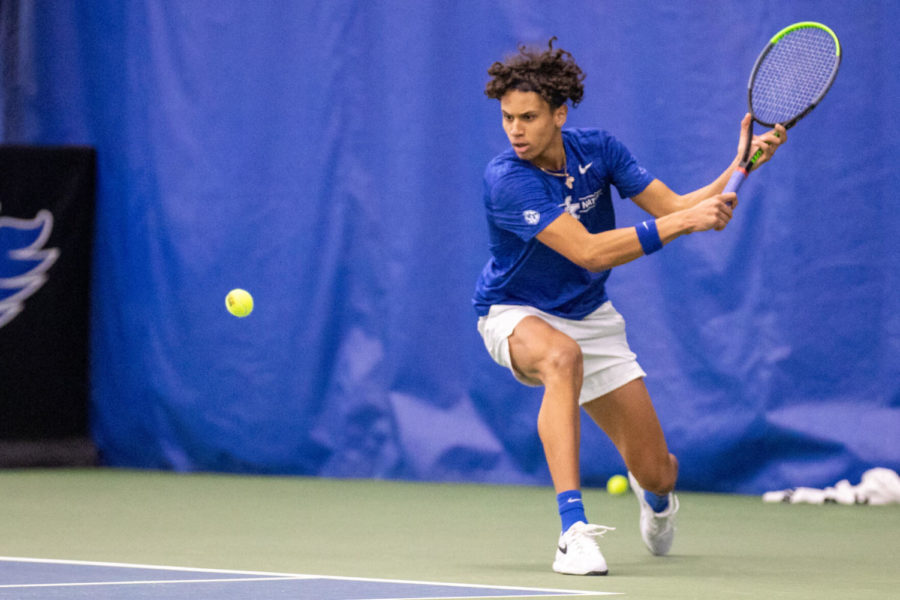 No. 9 Kentucky mens tennis fell just short of a win against No. 5 Florida on Sunday, falling 4-3.

A tense and difficult match from start to finish, the Cats left it all on the court at home inside the  Hilary J. Boone Center.

The Cats began the day with the doubles matches, but were unable to overcome the Gators. Court two, consisting of Francois Musitelli and Zemel were the first to fall, losing their set 6-1.

Although Liam Draxl and Millen Hurrion were fighting a close set over on court three, their  match went unfinished after the Gators earned their second doubles match win against  Joushua Lapadat and JJ Mercer with a score of 6-3.

Already down a point, Kentucky headed into the singles matches where all eyes were on Liam  Draxl taking on No. 3 Ben Shelton for the Gators.

Draxl and Shelton played three hard-fought and energetic sets, but Draxl was unable to catch  up to Shelton in the end, losing the third set 6-2.

“I needed to free up a little bit and play some better tennis. That’s what my opponent Shelton  did today and credit to him because he started serving a lot better and was playing aggressive… so that’s what I needed to do” Draxl said when reflecting on the end of his match.

While Draxl’s match was going on, Kentucky saw its first point on the court come from No. 9  Gabriel Diallo against Duarte Vale. Diallo played three sets as well, with a swift 6-3 win in the last set.

Florida earned another point against Kentucky on court two featuring Hurrion against No. 63  Sam Riffice. Hurrion lost the match 6-2 in both sets.

Things started to look up for Kentucky after Musitelli and Lapadat both brought in points for the Cats.

With the score tied up at 3-3, all hopes came down to Mercer.

A long first set saw Mercer come up just short against No. 113 Nate Bonetto, losing the set 7-6. The second set looked the same on the court with Mercer giving it his all, but losing the set 7-5 and the match.

“I think our team is close. We’re really close to being one of the top teams in the nation. We just have to do it now” Draxl said.

The Cats take the road this weekend to take on No. 37 Arkansas at Billingsley Tennis Center at 2  p.m. EST on Sunday, March 13.