Five pre-game notes for round three between Kentucky and Vandy 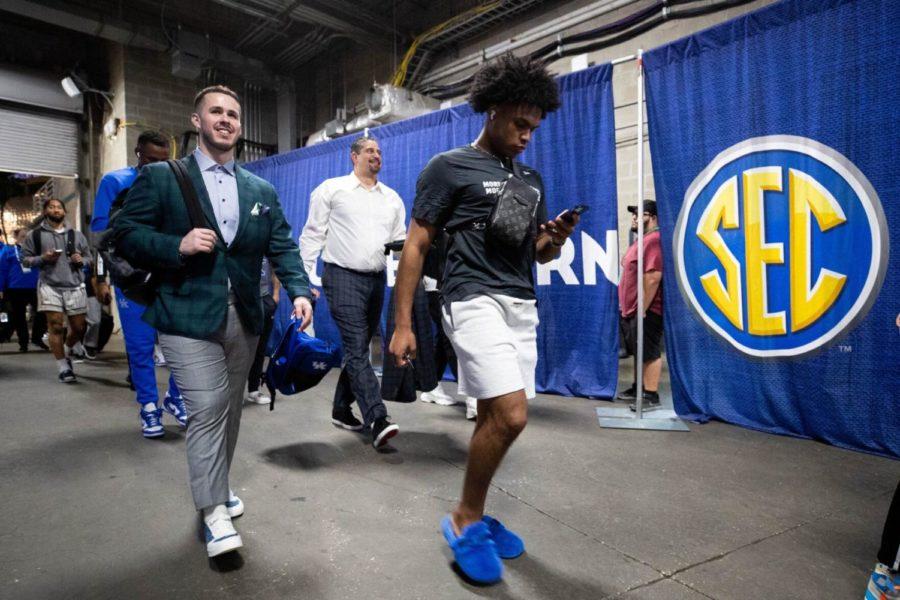 TAMPA, Fla.—On Friday night inside Amalie Arena, Kentucky will look for its third win of the season against the Vanderbilt, taking on the Commodores in the quarterfinal.

With tip-off set for approximately 8:30 p.m. EST, here are a few quick notes to nosh on regarding what happened in the first two matchups between the Cats and Commodores, and what to expect tonight.

In both meetings this season, its been Pippen doing the business for the Dores. If we’re being honest, that’s been every game for Vandy this year.

On Jan. 11, he scored 32 points on 11-18 shooting, raining down six 3-pointers. Despite the efficient night, he was unable to will Vandy in Nashville, as the Sahvir Wheeler-less Cats won 78-66.

Less than a month later, Pippen crafted a 33-point performance in Lexington while adding in six rebounds and five assists. Even still, Kentucky was victorious 77-70.

If Pippen can crack 35 points tonight, he’ll have scored 100 points in one season against Kentucky, a rather impressive feat.

UK knows he’ll be the Commodore with the ball in his hand, but does that even matter? One way or another, the guard is gonna score his points.

The Commodores are 13th in the SEC in free throw percentage, sitting at an abysmal 69.2 percent.

Foul trouble has never been that big of an issue for the Cats this season, but John Calipari may want to consider sending Vandy to the line a little more tonight.

Sahvir Wheeler getting reps against the Dores

Wheeler missed game one against Vanderbilt, as he was nursing his neck injury that came via one too many screens.

In his lone game against them on Feb. 2, he struggled to put the ball in the basket, to say the least.

Wheeler played 28 minutes, scoring just three points, all of which came from free throws. he shot 0-8 from the floor, in what was apart of a three-game skid where he failed to record a made basket.

On the bright side, his assists didn’t waiver. He tallied nine dimes in the win.

Now that Wheeler is back to being fully healthy, he’ll get another crack at getting some points against the Dores.

While it pales in comparison to what Pippen has done to UK this year, Mintz has shined in both games against Vanderbilt this season.

In game one, he dropped nine points on 3-5 shooting from deep. he took the starting role in place of the injured Wheeler.

Calipari shouldn’t force it if his usual backcourt battery is up to snuff, but Mintz may have the Commodores’ number. If thats the case, let Ghost’s dad go to work.

Assist, or not to assist?

Kentucky is first in the SEC in assists, averaging 16.2 per game.

Vanderbilt is last in the conference with 11.8 a night.

This has rang true in both games, as UK won the assist battle each time.

The Cats had 15 and 16 dimes, respectively. The Commodores, on the other hand, just nine and eight.

If the trend continues, Kentucky’s facilitation will be a huge key if the Cats want to land the trifecta on Vandy.