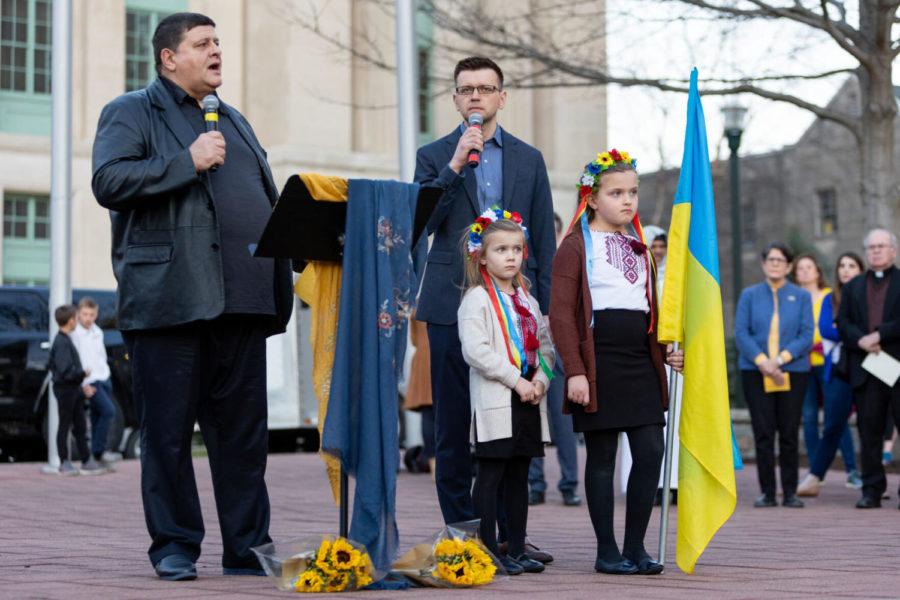 Event organizers address a crowd gathered for a vigil in support of Ukraine on Wednesday, March 2, 2022, at Courthouse Plaza in Lexington, Kentucky. Photo by Jack Weaver | Staff

A peace vigil was held in downtown Lexington on March 2 in honor of Ukraine, which was recently invaded and bombed by Russia.

Hundreds of people of all ages gathered together at Lexington’s Courthouse Plaza Wednesday evening to join in song and prayer for peace. Many showed support by wearing blue and yellow, holding the Ukrainian flag or displaying homemade signs.

Victor Selepina, a member of the Ukrainian Pentecostal Church, spoke at the vigil and led the attendees in a prayer for Ukraine and Russia and for Vladimir Putin to choose peace.

He said that he didn’t expect the vigil turnout to be as large as it was, but “God is good.”

Timothy Tewz, another member of the church, said, “We are gathered here together in unity to pray for Ukraine, which is our home country, and to hopefully bring awareness to what’s going on.”

“We’re really amazed at just how the community responded and with people that we don’t know donating to our church and to our mission so that we can send it overseas for humanitarian aid,” he said.

Tewz said that the situation for Ukranians is dire, not only due to the invasion but also because of a lack of basic supplies.

“People are hiding in bomb shelters and basements where they don’t have those resources and where it’s cold. Ukraine has some of the coldest temperatures right now, somewhere in the 20s,” he said.

Olga Lutchenko attended the vigil along with her children. Each of them was holding signs asking for peace. “I brought my kids here with me for them to know and understand,” Lutchenko said.

She said that they have family and friends who are currently in Ukraine. “We’ve been in contact with my mother-in-law, who’s alone in the village where she can hear the bombings all around her,” Lutchenko said.

She also said that they contact her sister-in-law and niece daily to make sure that they are safe and alive.

“It makes us nervous when we don’t get a response for a while,” she said.

Lutchenko said that the attack was essentially unexpected.

“I mean, we knew the troops were around, and it was more so everyone thought that it was just intimidation,” she said. “Nobody thought that they would bomb in the middle of the night. It turned everybody’s life upside down.”

Selepina, Tewz and Lutchenko all ask that everyone continue to pray that peace in Ukraine comes quickly.

“The main thing is prayer. You know, we all came out here to pray – people from all walks of life that support Ukraine. I’m so grateful that you guys were able to come out and so many people showed up,” Selepina said.

“I just want people to know that 100 percent of it will go towards the refugees of Ukraine, but God hears prayers. The prayers are powerful,” he said.

Lutchenko said that she has heard testimonies of people in Ukraine saying that they can feel the prayers.

“We just want for them, you know, for Russia to cease fire, to just go back home, and, of course, for restoration in Ukraine,” she said.