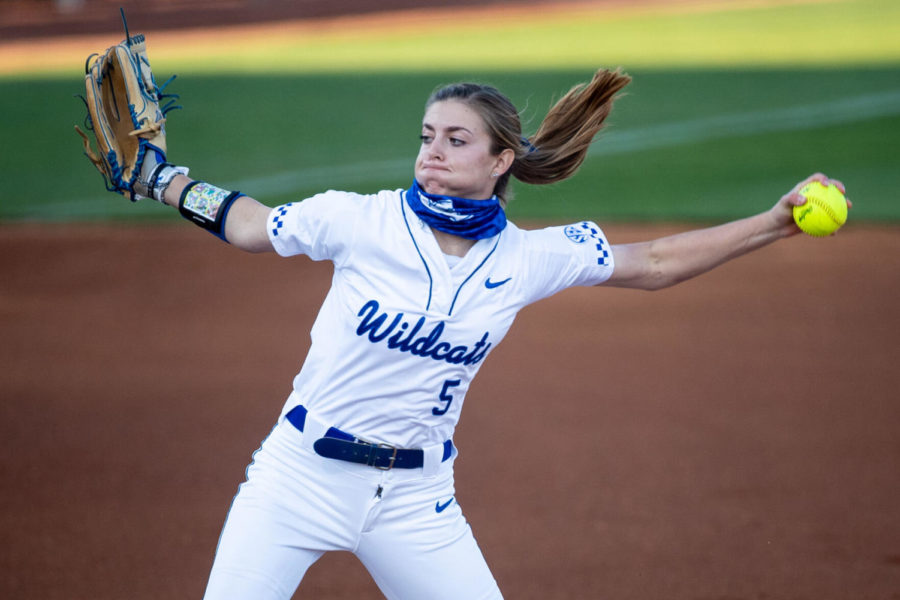 In a windy afternoon at John Cropp Stadium, No. 8 Kentucky was victorious against the Auburn Tigers, winning 11-3.

Renee Abernathy’s grand slam in the bottom of the eighth extended Kentucky’s lead to 11-3 and ended the game via run rule.

Alexia Lacatena was in the circle for UK, and she retired Auburn’s first three batters of the game.

Abernathy’s six-RBI day began in the bottom of the first, when her two-run double scored Kayla Kowalik and Rylea Smith, putting the Cats up 2-0.

In the top of the third, with the Wildcats up 3-1, Auburn was able to tie the game at three courtesy of Nelia Peralta’s double that scored two.

Kentucky would score eight unanswered after the game was tied.

Meeko Harrison’s line drive double that cleared the bases put Kentucky up 5-3 in the bottom of third. This would not be the end of the insurance runs. Lauren Johnson’s sacrifice fly that scored Kowalik put Kentucky up three.

Perhaps, one of the more impressive storylines of the game was Tatum Spangler’s relief work after she replaced Lacatena.

Spangler had only pitched one inning during the season before she came in against Auburn. She went 2.2 innings without giving up a run and struck out three on Friday afternoon.

With two on and one out for the Tigers in the top of the sixth, Spangler was able to get back-to-back strikeouts getting Kentucky out of the inning.

After the game, Spangler spoke about how well she kept her command so late in the game.

Surprisingly, the bottom of the sixth saw the most runs for Kentucky in the game.

Off the bench, Jaci Babbs led off the inning with a bunt that had her on third at the end of the play after a throwing error by Auburn. Babbs was able to score on a past ball extending UK’s lead 7-3. The game would soon be over after that.

With the bases loaded, Renee Abernathy stepped up to the plate and crushed a ball into center field for a grand slam. Abernathy’s sixth homer of the year sealed the game for UK, 11-3.

Abernathy was not thinking of a game-ending grand slam, but isn’t complaining about the result:

“No, not thinking grand slam ever. I was just thinking of getting it to the outfield so we could score that runner at third run by run and I knew the next person behind me would do their job. Really just wanted to put it in play hard somewhere in the outfield.”

Kentucky will look to win the series versus Auburn on Saturday, March 26 at 1 pm, with the final game of the series on Sunday.