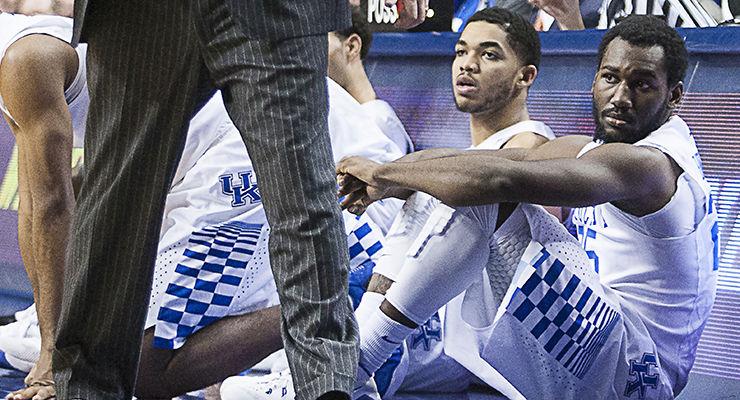 Guards Aaron Harrison and Dominique Hawkins of the Kentucky Wildcats look on during the game against the Missouri Tigers at Rupp Arena on Tuesday, January 13, 2015 in in Lexington, Ky. Kentucky defeated Missouri 86-37. Photo by Michael Reaves

UK head coach John Calipari was questioned, if not knocked, early in the season by some who were skeptical of whether or not his players would buy into his proposed two-platoon system.

But he maintained that it was the only way to get all of his players an adequate amount of playing time while keeping them all happy.

The platoons clicked and the blowouts began.

But when junior forward Alex Poythress was injured on Dec. 11, Calipari’s system took its first true hit and questions swirled around who would take Poythress’ place in the starting platoon.

It seemed fitting to plug either sophomore guard Dominique Hawkins or sophomore forward Derek Willis into the first platoon to keep the second platoon intact.

Instead, Calipari moved to a nine-man rotation and put freshman forward Trey Lyles into the starting lineup, leaving a vacancy in the second platoon.

When he wanted to replace the first platoon, Calipari would take four players out and leave one in with the other platoon, then use traditional two- and three-man substitutions for the rest of the game.

Calipari continued to call them platoons, but that was the end of the traditional five-in, five-out platoon system.

And that was fine for a while.

Able to play with finesse – shooting well above their averages from the field and from beyond the arc – the Cats soared past North Carolina and UCLA.

But then UK began to struggle offensively at Louisville, and the defense followed suit when it began SEC play.

The improvised platoon system had started to reveal chinks in the UK armor that had been so strong throughout the season.

One benefit to two completely separate platoons is that they feed off of each other, one always wanting to one-up the other.

All of the advantages that the platoons brought to the Cats were gone. They were finally on an even playing field with their opponents.

But sometimes in order to recognize how great something is, you have to lose it. And UK had officially lost it.

What had hatched out of necessity to begin the season was now a necessity for a different reason.

After the Cats’ double-overtime victory against Texas A&M, Calipari had finally seen enough and reverted to the two-platoon system Tuesday against Missouri.

However, despite the 86-37 rout of the Tigers, Calipari said that he didn’t know if he’d continue using the system when UK faces Alabama in Tuscaloosa on Saturday.

Whether Calipari is willing to admit it or not, bringing Hawkins into the starting lineup to revive the two-platoon system was the difference in the Missouri game and will be key to success throughout a physical conference schedule.