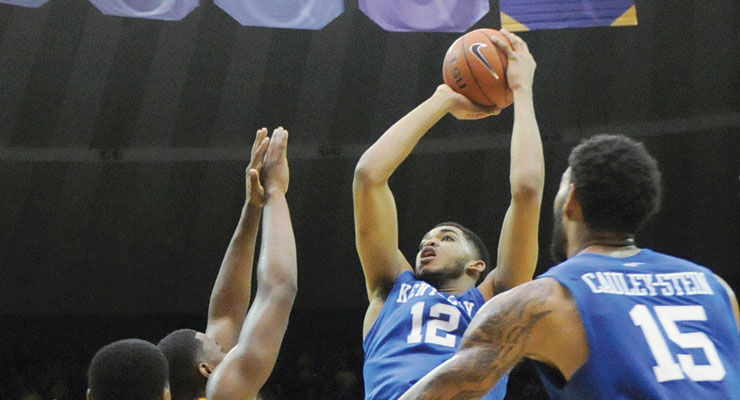 If the Cats had lost to LSU in Baton Rouge, La., on Tuesday, freshman forward Karl-Anthony Towns would have accrued the brunt of the blame.

He wouldn’t have been a scapegoat either; his technical foul halfway through the second half was of the bonehead variety you’re used to seeing from freshmen.

With 11 minutes left in the second half, Towns had a chance to push the Cats ahead 62-52 with an open dunk.

Instead, he somehow missed the dunk and even more inexplicably hung on the rim, triggering a technical foul.

Towns received a lashing from head coach John Calipari, and LSU went off, riding a 16-0 run to a six-point lead with a little more than 7:25 left in the game.

“(The technical) ignited them and killed us,” Calipari said.

Until that point, Towns had been the dominant force in the game for the Cats — grabbing nine boards in the first half and keeping the game competitive for them when LSU seemed unflappable.

Towns could have been affected by his error and disappeared behind his older teammates.

But like any great competitor, he took the mistake on the chin and was the reason the Cats improved to 24-0.

Towns finished Tuesday with 12 points and 12 rebounds, including key shots down the stretch.

But no stat was more important than his last offensive rebound.

Ahead 70-69 with less than a minute left in the game, sophomore guard Andrew Harrison drove to the free throw line and pulled up for a jumper that bounced off of the rim.

Towns fought over two LSU big-men for the offensive board, helping the Cats seal the win in the process.

The 6-foot-11 forward has been on quite a tear as of late, averaging nearly 15 points a game in his last four games and double-digit boards in his last three.

He may not be a worthy successor in the post to former Cats Julius Randle or Anthony Davis (who was in attendance Tuesday), but he’s been the player UK has needed in tough late-season road games.

And he’s making a case for being the best player in one of the more well-rounded recruiting class that Calipari’s had in his time at UK.

Despite all of the much-deserved credit that will float Towns’ way in the aftermath of the win, he was aided by the questionable-at-best coaching down the stretch by LSU head coach Johnny Jones.

His poor play-calling and clock management in the last five minutes of the game aside, his timeout in the final five seconds was the nail in the Tigers’ coffin as the team fell short of the upset bid.