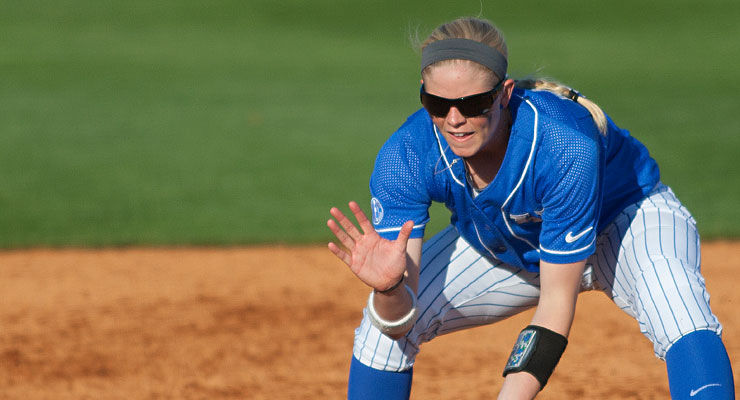 Shortstop Christian Stokes fields a ground ball during the game between the University of Kentucky softball team vs. University of Arkansas at John Cropp Stadium in Lexington, Ky.,on Saturday, April 19, 2014. Photo by Michael Reaves

UK notched two straight wins to begin the Mary Nutter Collegiate Classic on Thursday, defeating No. 10 Arizona 5-2 in the afternoon and Long Beach State 13-1 in the evening.

Junior right-hander Kelsey Nunley threw 123 pitches in 6.2 innings, giving up two runs while striking out five in the win against Arizona. Nunley is now 3-0 with a 0.89 ERA this season and has pitched deep in games in all of her starts. The two runs against the starter came in the seventh inning. Freshman left-hander Erin Rethlake came off the bench to record the final out, earning her first career save.

Sophomore Breanne Ray put the Cats on the board first in the second inning with a two-run home run. It was the second career home run for Ray.

Junior infielder Nikki Sagermann and freshman outfielder Brooklin Hinz both hit run-batted-in-doubles in the third inning, while junior first baseman Maisie Steed scored on a wild pitch in the fourth inning to help UK seal the win over the Wildcats.

In the evening tilt against Long Beach State, junior infielder Christian Stokes had a career day, going 5-for-5 at the plate, tying UK’s record for hits in a game. Stokes hit a double and four singles, recording four RBIs on the day.

Sagermann went 2-for-4 and recorded two RBIs in the game. Ray was a perfect 3-for-3 at the plate with a RBI of her own.

Sophomore left-hander Meagan Prince went 4.1 innings, giving up a run while striking out two. Prince is now 4-2 on the year in seven appearances on the mound, including five starts.

UK will continue the Mary Nutter Classic on Friday, facing off against LIU Brooklyn and Oregon State in a double-header.