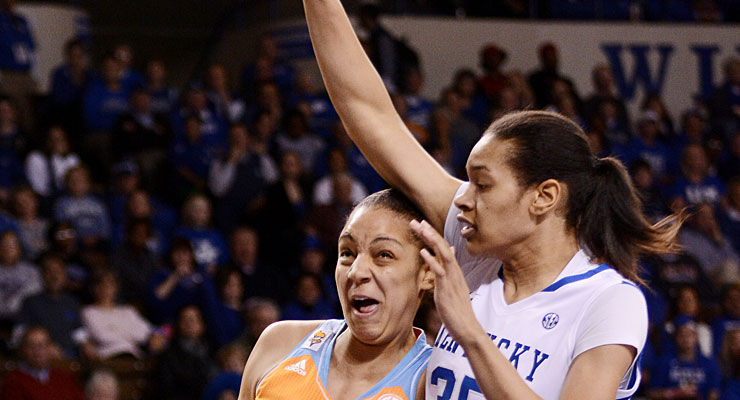 Kentucky forward Alexis Jennings guards the basket while Tennessee forward Cierra Burdick (11) drives the ball during the second half of the Kentucky Hoops versus Tennessee Vols at Memorial Coliseum in Lexington, Ky., on Thursday, January 29, 2015. Kentucky loses 72-73. Photo by Caleb Gregg

Yet again UK went up against and lost to the once-defending SEC champions. The outcome was not at all surprising as UK defeated the Volunteers just once in eight tries in the SEC Tournament, with the last win coming 33 years ago.

In each of the past three games, the same anomaly arose. The guards played well but the post players were absent. On Saturday, that observation was noticeable given the end-game box score: center Azia Bishop – zero points; forward Alexis Jennings – four points; forward Alyssa Rice – two points and forward Jelleah Sidney – two points.

UK scored 64 points during the loss. At this point it’s like a darker version of Groundhog Day: the Cats play against physically more dominant teams and get blown away. The losses to Tennessee are confusing, though. The Volunteers lost twice to South Carolina, a team whose only loss was against the unrivaled Connecticut Huskies. Tennessee’s loss to the Gamecocks is significant because UK defeated South Carolina on Senior Day, with the help of numerous missed free thows and layups.

So if UK can defeat a potential NCAA champion contender, why can’t it beat Tennessee?

UK has no answer for opposing players who have the skill to shoot from range and the size and speed to maneuver around the paint.

As good as Jennifer O’Neill is, and as talented as Makayla Epps is, they have no business guarding 6-foot-2 Cierra Burdick who can yank down rebounds and shoot jumpers. But what choice do they have when UK’s post players have neither the athleticism nor the physicality to guard the four-time gold medalist. Or how about Duke’s forward Azura Stevens. She had 17 points back on Dec. 21 as Duke blew out UK. Even in UK’s loss to Texas A&M, it was a forward who dominated the Cats as Courtney Walker tapped in 16 points.

UK’s fate will be sealed during the NCAA Tournament once it encounters a team with a talented forward/guard. The only solution to this conundrum doesn’t lie within the Tennessee games, but within the win against South Carolina. Forward A’Ja Wilson poured in 16 points and was virtually unstoppable, but it was the 32 percent from the field from the rest of the team that doomed the Gamecocks.

The solution: UK has to focus its attention not on the forwards/guards, but on the remainder of the team. Play solid defense, hope they miss shots and force the forwards beat them.