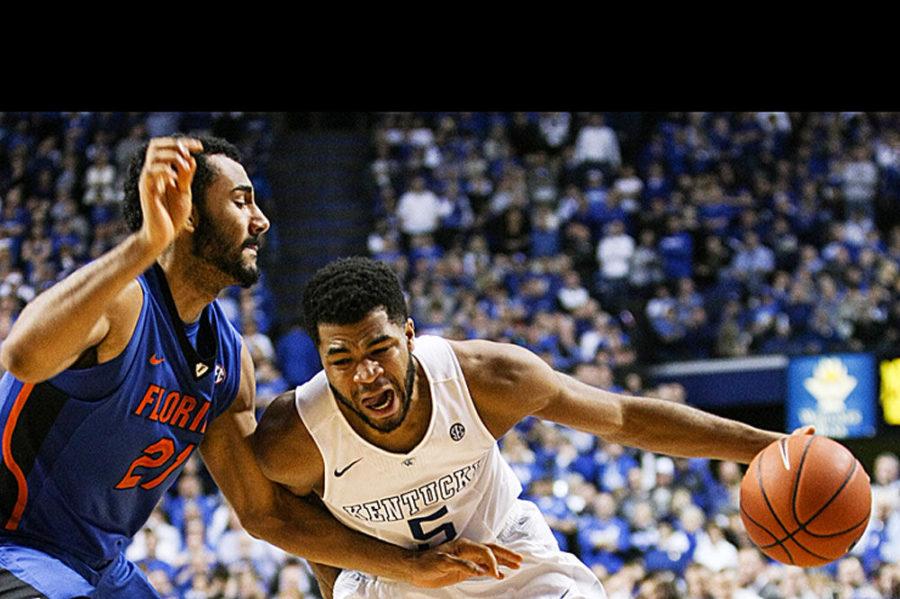 Kentucky guard Andrew Harrison makes a dash for the basket during the second half of the Kentucky vs. Florida game at Rupp Arena in Lexington, Ky., on Saturday, March 7, 2015. UK defeated Florida 67-50, completing a perfect regular season. Photo by Adam Pennavaria

The SEC Tournament is already underway as early-round teams fight amongst themselves for a chance to compete against the conference’s elite. UK head coach John Calipari has made it clear for years that he doesn’t care about the conference tournament, and he did so again after the team’s victory against Florida Saturday.

“I’m not a big fan of tournaments,” Calipari said. “Never have been. Three games in three days. What does that do for you? I mean, I don’t think it does anything. I’m not a big fan.” He did say he does it for the fans and that he knows how important it is to them.

And there’s nothing the fans want more than a perfect 40-0 season. So the Cats will head to Nashville guns blazing as the obvious favorite. But these five teams have a shot – albeit minimal – of spoiling UK’s tournament for the fourth-straight year.

Conventional wisdom would tell you that the second-ranked team in the conference should have a better shot at knocking off the No. 1 team than the four other teams. But since the Razorbacks were dismantled by UK on Feb. 28, they had to rally to beat South Carolina then fell at home to LSU that was without its second-leading scorer Jordan Mickey. Not to mention Arkansas doesn’t match up well with the Cats.

After losing seven-straight games mid-season, the Commodores have been on a tear. They’ve won five straight games and eight of their last 10. And like past young Calipari teams, this young Vanderbilt team is beginning to figure it out. There’s no team scarier during tournament time than the hot team. And the second hottest team in the conference is Vanderbilt.

The one team UK had the best chance of beating the Cats was Ole Miss. It had a shot on the final possession of the game to take either a two- or three-point lead, but the shot rimmed out and the Rebels were overtaken by the Cats in overtime. And if Stefan Moody – who had 25 points in the game but was sidelined for the final three minutes of regulation – stays in for the entire game, the Cats probably lose the game.

LSU had the Cats down by nine points in Baton Rouge, La., before squandering the lead to lose by two. But there isn’t a more talented team in the SEC (outside of UK, obviously) than the Tigers. LSU doesn’t have as impressive of a record as they should. They’ve lost to bottom-of-the-barrel SEC competition like Auburn, Missouri and Mississippi State. But, like the Cats, tend to wake up for big competition.

The Cats were in serious danger of a loss in Athens, Ga., and the Bulldogs seem to match up well with this UK team. But this prediction is predominantly based on the three-game phenomenon. It’s extremely difficult to beat a team three times in one season. Granted, the Cats lost to Florida three-straight times last season, but their final game was a one-point loss instead of a blowout like the previous two matchups had been. And when the Cats won the championship in 2012, Vanderbilt finally found a victory in the conference championship against them after two-straight regular season losses.