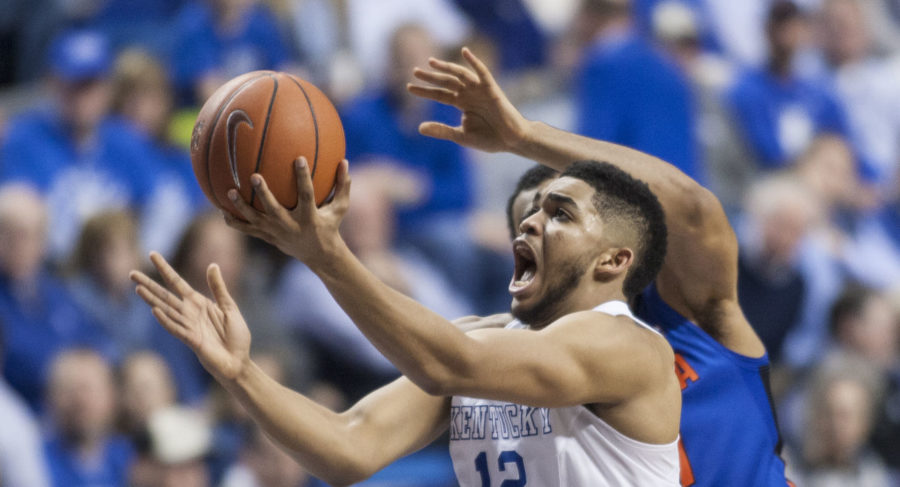 Center Karl-Anthony Towns of the Kentucky Wildcats goes for a layup during the game against the Florida Gators at Rupp Arena on Saturday, March 7, 2015 in Lexington, Ky. Kentucky defeated Florida 67-50 to complete a undefeated regular season. Photo by Michael Reaves

The best player on the court Saturday had two points in the first half. He had 13 in the game.

Freshman forward Karl-Anthony Towns didn’t have his best stuff offensively against Florida – he missed six of his 10 shots, including four of his first five – but the mark of a great player is the ability to make a positive impact on the game when your arsenal isn’t completely full.

Towns saw an opportunity exploit the Gators’ front line defensively and took it, blocking six shots and nearly notching his seventh double-double of the season with nine rebounds. And despite not having much of a direct effect on the Cats’ side of the scoreboard, he made his presence known in other ways.

In general, very good post players have great offensive ability, but Towns is starting to develop the presence of mind in the paint to look for his teammates and kick the ball out to open 3-point shooters.

He had two assists in the paint to a cutting Trey Lyles – something an early-season Towns would have passed up to make an offensive move and force a shot.

Developing a capacity to make those passes is what separates a great post player from a very good post player with great offensive ability. As a result, we’re beginning to see a transcendent college basketball player.

Towns has 71 points in his last five outings (14.2 points per game), and four of his six double-doubles on the season have come in the last 10 games. Seemingly the last thing that can derail Towns is foul trouble.

In his last 11 games he’s failed to score in double-digits only three times. In those games he’s picked up two early fouls that usually keep him sidelined for the remainder of the first half.

However, when he plays at least 20 minutes in a game, he’s scores in double digits with ease. In fact, you’d have to go back nearly two months (16 games) to the Cats’ matchup against Texas A&M to find a game in which he played at least 20 minutes and failed to rack up at least 10 in the points column.

Since February began Towns has been on an up-swing like no one in college basketball, and he’s only getting better with each passing game. Head coach John Calipari said after the game Saturday that he continues to get after Towns because he doesn’t want him to be just another good big, he wants him to be the best.

That could be a little bit of wishful thinking on Calipari’s part, because it’s hard to believe he can get any better than he is right now.