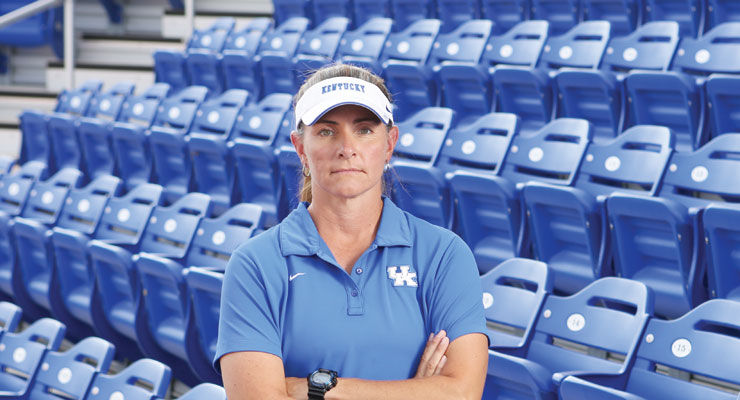 UK Softball coach Rachel Lawson teaches her team hard work by having them do what needs to be done, whether it is organizing the shed or practicing. Photo by Chet White UK Athletics

UK softball head coach Rachel Lawson has always understood the value of being a part of a team.

As the 10th child in a family of 12 from Castle Rock, Colo., her parents, Gerald and Elaine, instilled values in her that have led to a successful coaching career.

“I learned teamwork at a very young age,” Lawson said. “Both of my parents have a tremendous work ethic and led our family in a way that every person in our family, while very different, are still successful.”

Softball has always played a big role in Lawson’s life. She signed to play with the University of Massachusetts during her senior year of high school and went on to become an Atlantic 10 All-Conference first baseman in 1992 and 1994.

It was a college career full of exciting moments and great memories, but it almost never happened.

As a senior in high school, Lawson tore her ACL and feared that her dream of playing college softball would be over before it began. Fortunately for her, several of her high school teammates committed to colleges on the east coast. Through those connections, a relationship was built and word spread to the northeast that Lawson could be a worthy prospect. UMass, coached by Hall of Famer Elaine Sortino at the time, scouted Lawson while watching her play as a catcher and decided to give her a chance.

Sortino taught Lawson the value of doing the little things. Whether it was playing on what Lawson said was “the worst field in the state of Massachusetts,” which had no dugouts until 1992, to shoveling snow off the field, Sortino was there to provide understanding of why all those tedious tasks were necessary in building something special.

“The best thing about her was that whatever she was trying to get you to believe in, she could sell it,” Lawson said. “People were very committed and loyal to her.”

Her experience under Sortino was vital to her success at UK. Before 2008, UK never played in a postseason game in 11 seasons, since then, the Cats have been to six NCAA Tournaments. –

“When I got to Kentucky, we worked very hard on the little things,” Lawson said. “If the shed needed to be organized, you organized the shed. If the windscreen needed to be repaired, you repaired it. (Sortino) taught me the value of each individual moment. Since we’ve been here, we’ve just tackled the little things and that has helped us build the program that we have now.”

That strategy has worked, as the program is now considered among the nation’s best. Lawson has more career wins than any other coach in team history; her teams have made it to postseason play every season since 2009, including super regional appearances in 2011, 2013 and 2014, and UK defeated UCLA in the super regionals last year to advance to the College World Series for the first time in school history.

“It was a great postseason run for us last year,” Lawson said. “Kelsey Nunley was tremendous for us. She did a nice job of keeping us in every game. We had a senior class that had fought through a lot of things in their four years and many of them showed up in the postseason.”

Among the seniors who had seen adversity in their four years was outfielder Emily Gaines. Gaines played sparingly in her first three seasons with the Cats, but made a name for herself during her senior year last season. She had a .297 batting average with seven homeruns and 36 runs batted in. While she learned plenty on the field from Lawson, it was the lessons off the field that Gaines values.

“She taught us the importance of preparing for our future,” Gaines said. “Most coaches are only focused on winning, but coach Lawson always made school and our grades a priority.”

Gaines, who has since graduated, said that Lawson always worked practice times around her players’ class schedules, which is rare for college coaches to do.

While Lawson is always focused and serious on the field, off the field she’s as laid back and funny as anyone according to Gaines.

“She’s always giving her players a hard time,” Gaines said. “It’s all in good fun of course. Her sarcasm is second – to – none.”

“She’s really just an awesome person,” Crane said. “She’s a very intense and focused individual. The thing I tell people is that you know where you stand with her. She demands a lot out of her staff and team, but she’s able to do that because of who she is. She’s been great to work with and she’s been a great friend.”