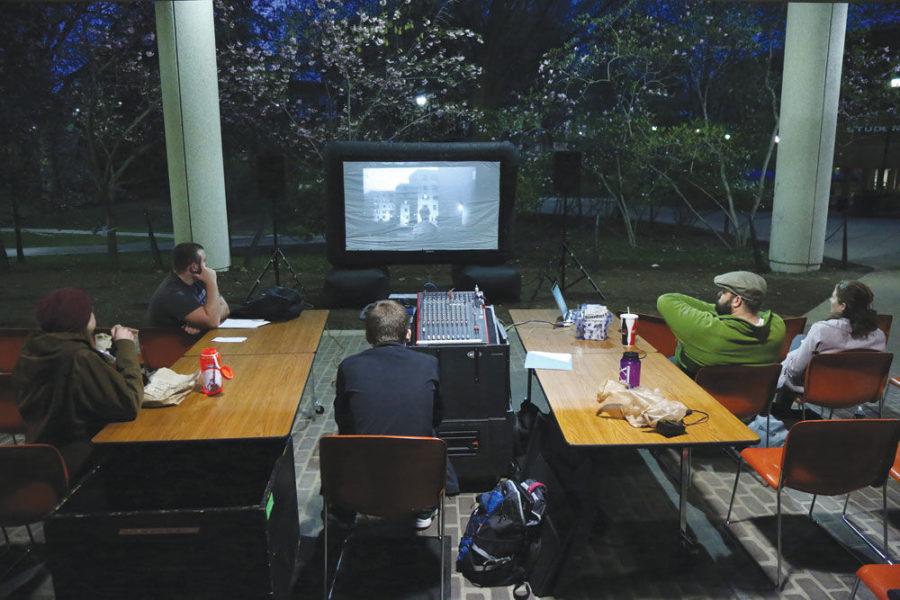 Students learned the value that bicycles hold to people around the world at the screening of the 1949 film “The Bicycle Thief” at the annual Bike-In Movie.

The event was held outdoors for the first time this year, and was part of the third annual UK Bike Week, sponsored by UK Parking and Transportation Services.

According to UKPTS representative Chrissie Tune, the film event intended to emphasize “celebrating cycling on campus, as well as letting people know about the resources available.”

Tune said that they decided to have the event outside for the first time despite the fact that rainy weather had already impeded on Bike Week events.

“The rain hasn’t exactly cooperated with us,” Tune said. “We decided it would be a little more unique, a fun atmosphere.”

Students who rode their bike to the film screening received a free set of LED lights, which are longer lasting and provide for safer bike rides.

“It helps them be visible in both dark and inclement weather,” said Tune, who called the lights “an incentive for people to come. With it being an event that was going to end after dark, we thought it was appropriate to have what we called a ‘random act of safety.’”

Victor Smith, program director for Wildcat Wheels, said that he wanted to bring a unique and acclaimed film that emphasized the importance of bike riding.

The film, set in post World War II Italy, features Antonio Ricci, a working man with a wife and two young children. He struggles to provide for his family by working a job posting advertising bills, for which he uses a bike for transportation.

After his bike is stolen, the remainder of the film focuses on the theft’s emotional impact on Ricci, as it was instrumental to his way of life.

“Why should I kill myself when I’ll end up just as dead,” said Ricci in the film, illustrating the devastation the loss of his bike caused.

Smith chose the film to illustrate this kind of importance.

“There’s something to the message of how important bicycles are to people,” Smith said. “Bicycling is a recreational activity, but it is also a means to a livelihood, and I think that’s one of the things that gets lost. People ride their bikes thinking that everybody who rides is riding for fun, and that’s just patently untrue.”