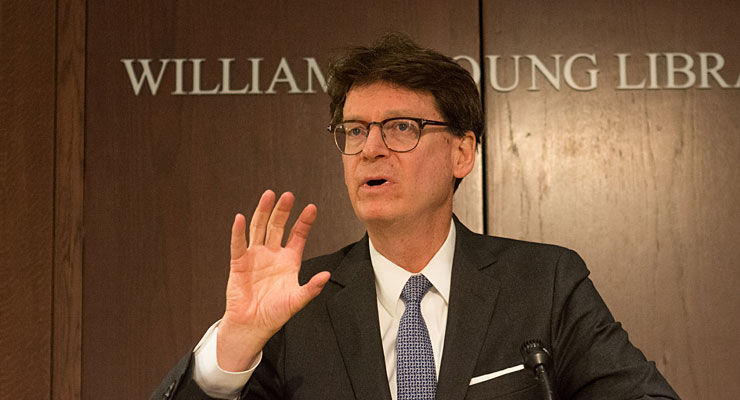 UK graduate and director of the Administrative Office of the U.S. Courts Jim Duff speaks to students in the William T. Young auditorium in Lexington, Ky., on Saturday, February 28, 2015. Photo by Cameron Sadler

James Duff, the director of the Administrative Office of the U.S. Courts and former director of the Newseum, spoke to UK students and faculty about the state of America’s First Amendment on Tuesday evening.

Duff focused on the importance of protecting the individual liberties that were included in the First Amendment.

“Countries around the world have these rights, but no protection of them, so it is our duty to not take these for granted,” Duff said.

“This evening is a way to call attention to the importance of freedom of the press, because journalism as we know it would not exist without it,” Farrell said in his introduction. “As citizens, we have these rights, and we need to understand and protect these rights.”

According to Duff’s speech, the First Amendment is constantly being threatened by “an indifference that may be growing within our society which can be traced to a perception of media bias.”

Therefore, the media’s role in society needs to be that of an unbiased watch dog.

“We as Americans have an independent judiciary which is crucial to preserving our liberties. Media must act like a watchdog to help keep the judiciary,” Duff said. “If the media is perceived as biased, you may not get the objective that the First Amendment allows journalists to give. If you don’t get it, what incentive do people have to protect our political parties?”

Duff himself is no stranger to politics. He recalled the Watergate scandal’s occurrence during his internship for Congress and expressed how the media exposed issues that Americans had no idea were a problem at the time.

However, Duff believes that today, “the media has been too complicit on the sidelines for not exposing news because of business of conflict.”

Duff said that returning the business of journalism to one that emphasizes investigative reporting would take hard work.

Undeclared freshman Taylor Stephens attended the lecture and was prompted to think more about journalism’s strengths and faults.

“As a college student, it gave me motivation to become more involved in keeping our liberties safe,” Stephens said. “Media is such a big part of today’s world, but I never realized that it also has its weaknesses.”