Halftime: Wisconsin drains last-second jumper to tie it at 36 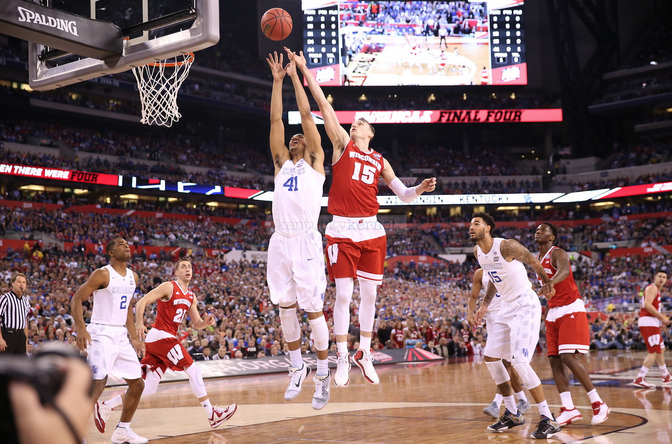 The mantra for UK this season has centered on the notion that if one player struggles another will rise.

That notion was put to the test in the first half of the Final Four as UK road the coattails of Andrew and Aaron Harrison into a 36-all tie at halftime against Wisconsin.

The Harrison’s combined for 11 of UK’s points as UK ran with the offensive-minded Badgers. UK shot 60 percent from the field and were a perfect 2-for-2 from three, but offensive rebounds and bad luck helped Wisconsin remain with the Cats.

After UK opened with authority, scoring-five straight points off a three and a Willie Cauley-Stein dunk, the Badgers fell into their trademark offensive, which consists of shooting high-percentage shots. That ability to create open shots propelled Wisconsin to a nine-point lead just over the midway mark of the first half.

UK, however, grinded back. Chipping away at the Badger’s lead, UK took a two-point lead with 30 seconds left in the half, but a late second two over the stretching arms of Marcus Lee tied it up as the buzzer sounded.