UK football versus the field 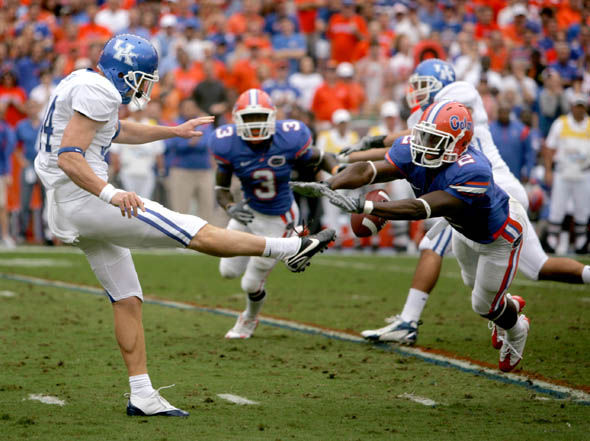 In response to a slow UK football news day, let’s take a look at how the Cats fairs against their opponents this season, starting with:

UL-Lafayette: This matchup on Sept. 5 will be the first meeting between the two teams.

South Carolina: UK hits the road to face a USC team that is sure to remember UK’s come-from-behind win last year. USC, however, still leads the series 17-8-1 and has an 8-3-1 series record at Columbia, SC.

Florida: UK fans know all to well UK’s woes against the Gators. Florida will look to make it 29 straight on Sept. 19 when it travels to Commonwealth Stadium. History does the Cats no favors in this series, as Florida holds a 48-17 series record and a 19-10 record in Lexington.

Missouri: Though the two teams have met just five times, the Tigers hold a 3-2 advantage and have won three straight against UK.

Eastern Kentucky: It’ll come as no surprise to hear that UK has a 3-0 record against the Colonels. UK’s last victory against its mid-major rival came back in 2009 when the Cats won 37-12 in Lexington.

Auburn: The Tigers head to Commonwealth Stadium on Oct. 15 for a Thursday night matchup. Auburn has a 12-4 record in Lexington and a 25-6-1 overall series record against UK.

Mississippi State: UK will look to take a one-game series advantage on Oct. 24 when the Cats head to Starkville. The series is tied at 21 apiece and the Bulldogs have a 11-7 home record, but have won six straight against the Cats.

Tennessee: In as lopsided a series as it comes, the Volunteers have dominated UK throughout the two team’s history. Tennessee leads the series 77-24-9 and look to add another when the Volunteers head to UK on Oct. 31. Tennessee has won three consecutive games and has a 36-14-3 record in Lexington.

Georgia: Another lopsided series for UK against an SEC foe. The Bulldogs lead 54-12-2, hold a five-game winning streak and are 27-4-2 down in Athens, Ga.

Vanderbilt: The only series advantage UK has against an SEC team. The Cats hold a 42-41-4 record against the Commodores, but Vanderbilt holds a 26-19-2 record at home, which is where UK travels to on Nov. 14.

Charlotte: This will be the first meeting between the two teams.

Louisville: UK will attempt to even the series at 14-games apiece when the Cardinals travel to Lexington. Louisville, though, has won four straight games in the series.