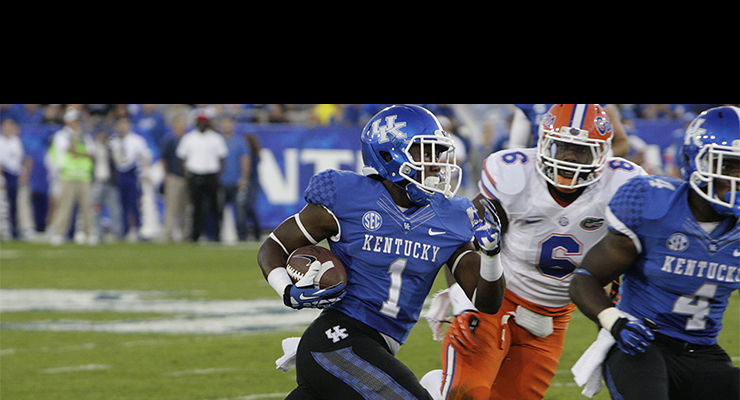 The UK football team opened practice up to the media Tuesday afternoon, progressing through day 12 of fall camp. Here are some notes from the day’s action.

-Boom Williams was dressed, but limited: After suffering a sprained knee in practice last week, the projected starting running back returned to the gridiron Tuesday, but was limited in reps. Williams did not run live during 7 on 7 or 11 on 11 drills. Expect the coaching staff to keep Williams’ reps limited until the end of August.

-Wide receiver Ryan Timmons in a walking boot: The junior wide out, who led the Cats in receptions and receiving yards last season, was held out of Tuesday’s practice with a boot on his left foot. Timmons battled an ankle injury during the end of the season last year, and was being held out for precautionary reasons. Offensive coordinator Shannon Dawson said that Timmons “probably could’ve gone today,” so the injury is not  expected to be serious.

-Young receivers showed promise: With Timmons being held out due to injury, fellow wide receivers Dorian Baker, Blake Bone, Alex Montgomery and Jeff Badet all had glimpses of SEC-skill, something UK has not been accustomed to in the past. This group is the biggest, deepest and most physical group of receivers Stoops has had at UK. Their large frames allowed them to make a number of spectacular catches during Tuesday’s practice. Though there were still a couple drops, the receivers look vastly improved this year.

-Freshmen cornerbacks saw plenty of first team snaps: Despite returning two senior cornerbacks from last year’s squad, freshman standouts Chris Westry and Derrick Baity are making a push for the starting jobs. The two true freshmen were swapped into different packages Tuesday, but one constant throughout practice was that senior CB Fred Tiller played a majority of his snaps with the 2nd Westry and Baity were paired with senior Cody Quinn and junior J.D. Harmon, but also saw a good amount of time together playing with the 1st team defense. The size and strength of the freshman corners make them a threat to steal the starting cornerback positions.

The defense brought the energy: After Tuesday’s position drills wrapped up, the offense and defense squared off in 7 on 7 and 11 on 11 drills, drills that were dominated by the defense early on. The first team defense kept QB Patrick Towles on his feet and tested his patience with his progressions. Though the offense did have some success through the air, the first team defense clogged up running lanes and broke up passes left and right. There are still question marks on who the starters will be, but the defense has taken a step forward thus far in fall camp.