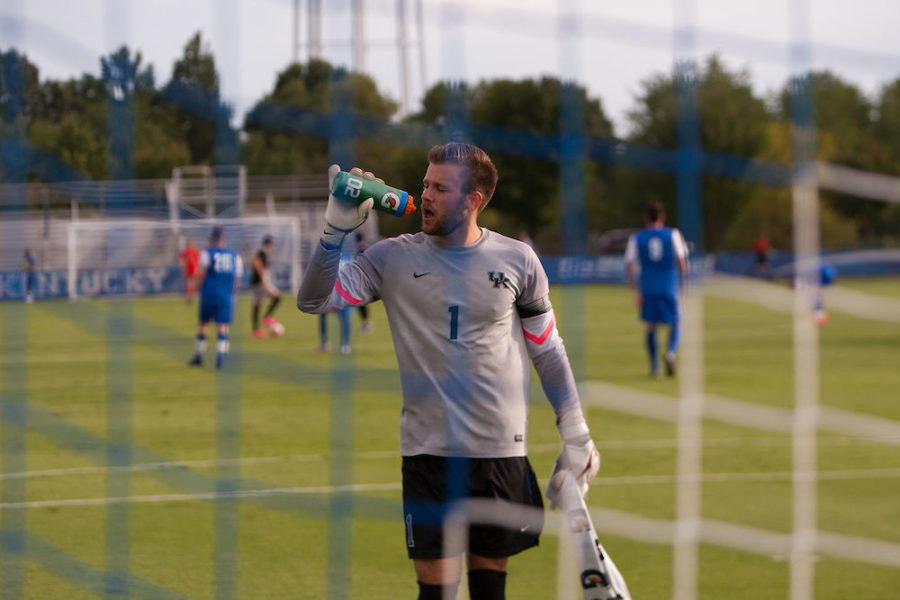 The UK men’s soccer team scored two goals in the second half to beat Valparaiso 2-1 in their season opener on Friday night.

“Coach told us to be aggressive and don’t give up on balls even if you get beat. Go for it as much as you can and the goals will come,” midfielder Napo Matsoso said.

The goals did come, but it took all 90 minutes.

The game got off to a physical start with teams juggling possessions back and forth. Valpo goalkeeper, Nico Campbell, had a violent collision with UK sophomore forward Andrew McKelvey on two crosses that UK failed to convert.

The Crusaders weren’t able to get many quality opportunities, with UK’s defense stepping up with the help of one of the best goalkeeper’s in the nation, Callum Irving.

Despite Irving’s best efforts, Valpo was able to grab the first goal of the game. Junior forward Matthew Gweh connected with a thru ball 25 yards out in the 39th minute causing the Cats to head into halftime trailing 1-0.

“I think we all talked about it in the locker room to go after it no matter what the result was and just play hard for each other,” Matsoso said.

UK’s first goal came from Noah Hutchins in the 55th minute, shifting the momentum and pace of the game in the Cats favor.

The Cats came out of the locker room a different team, something head Coach Johan Cedergren was very pleased about. “I wanted to make sure their chest was out and head was up and to make sure that they knew there was still plenty of time left in the game,” said Cedergren. “The guys knew that the game wasn’t close to being over.”

The referees let a couple of questionable calls go leading to a physical match. A rough slide tackle caused Matsoso to go down hard and come up limping. Cedergren decided to leave a hurting Matsoso in the game, a decision he would not regret.

A mis-touch in the box by Valpo led to Matsoso scoring the game-winning goal in the 90th minute.

“I ended up deciding that you don’t take the best player in the country out,” said Cedergren about Matsoso.

The Cats return to action September 4th against Wright State at the Bell.