Editorial: What happened to student protests? 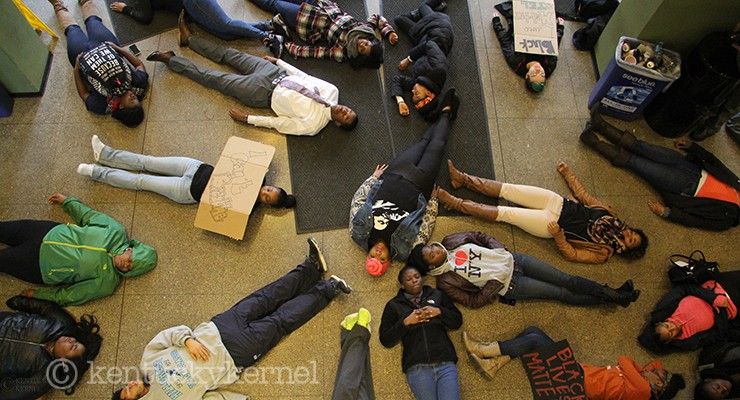 Protestors lie on the floor of the Patterson Office Tower lobby to symbolize those who have been killed at the hands of a police office. Tuesday, December 9, 2014 in Lexington. Photo by Joel Repoley

When UK decided to board resident advisors in the same room, rather than giving them their own rooms, nearly 500 people singed a petition in protest.

Comments on the online petition complained that having a roommate makes the job too difficult. Other comments complained that the RAs weren’t consulted about the decision.

But not a single student protested on campus. There were no picket­ signs, there were no sit-ins and there was no RA strike.

Students who feel they’ve been wronged by UK need to organize, gather on campus and show their discontent in crowds. An online petition is a good place to start, but there’s nothing that says, “I’m as mad as hell, and I’m not going to take this anymore,” like a mass protest.

The United Students Against Sweatshops last year was one of the few campus organizations to hold protests — the group protested UK’s ties to VF Corporation, a clothing company that previously sourced college apparel from factories in Bangladesh. A Black Lives Matter protest, though not directed at the university, was also a strong showing of student activism last year.

It may be a good thing that students rarely see protests on campus. Maybe, and hopefully, there is not much to be upset about. But it is important for students to know they have the power of numbers.

UK has an undergraduate population of more than 22,000 students, and it doesn’t take nearly 22,000 people to send a strong message to university officials.

Students often complain about rising tuition rates, lack of parking and, more recently, the boarding of RAs in the same rooms, but what action comes from these complaints?

Protests are not guaranteed to create change, but if students are being wronged, they ought to show up outside the Main Building and voice their complaints en masse.