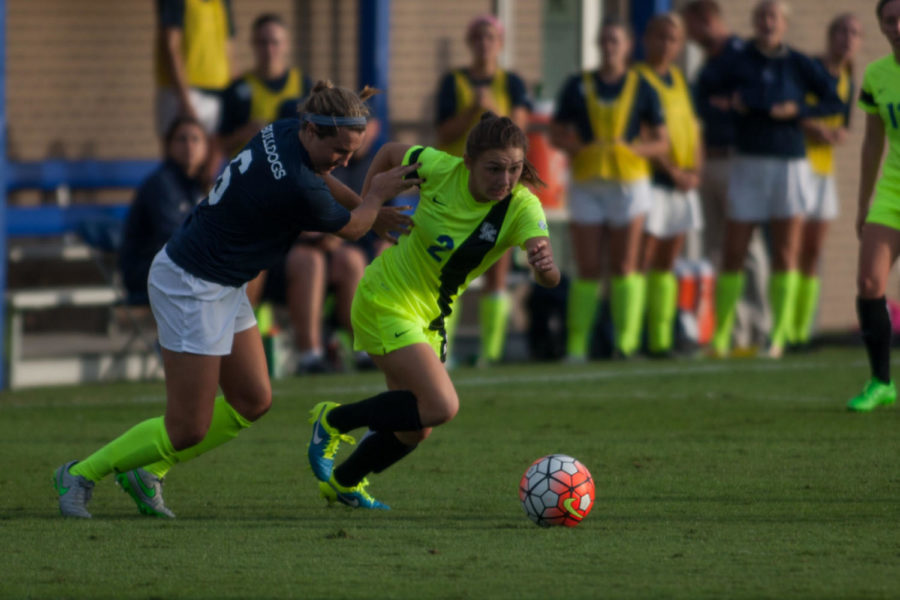 UK women’s soccer is set to take on Southeastern Conference foe Missouri at 7:30 p.m. Friday, coming off a big 4-1 victory against Butler on Sunday. The Cats are off to a hot start this season and sit on top of the SEC standings.

The Cats will be on upset alert Friday night against a Missouri team that has already knocked off No. 9 Auburn earlier this season. Coming off two straight wins against Alabama and Butler over the weekend, UK is on a roll. But after five days of rest, head coach Jon Lipsitz will have to make sure his team doesn’t come out flat against the Tigers, who have already proved they are capable of an upset.

Defense will be key for the Cats. Freshman goalkeeper Katelyn Jensen will need to have a strong performance against the SEC’s second leading team in shots on goal. UK’s backline will prove to be important to try to relieve pressure on Jensen, and will try to expand on their exceptional defensive performances as of late.

The duo of Swift and Dooley has been a potent offensive attack for the Cats, combining for 8 goals and 5 assists this season. Dooley has scored 4 goals of her 5 shots on goal, while Swift leads the team in shots on goal with 32, constantly putting pressure on the opposing goalies. This lethal combination of accuracy and pressure has helped propel the Cats to an 8-1-1 record, and will prove to be vital against Missouri’s strong defense Friday night.

Coming off back-to-back 1-0 losses, the Tigers will be looking to rebound and steal a huge signature win against another ranked opponent. The Missouri offense, which has struggled to score lately, needs to step up with sophomore Savannah Trujillo and senior leader in shots on goal, Reagan Russell. The key to victory for the Tigers will be staying strong defensively against a great UK attack. If the Tigers can start fast and catch the Cats flat footed, they might be able to complete the upset.

The sophomore midfielder and leading goal scorer for the Tigers will need to use her speed to put pressure on the stout UK defense. Trujillo averages 1.44 shots per game. Her presence helped the Tigers upset No. 9 Auburn earlier this season by scoring a crucial goal, so look for her to possibly make her presence felt again versus the Cats.