‘All Lives Matter’ misses the point 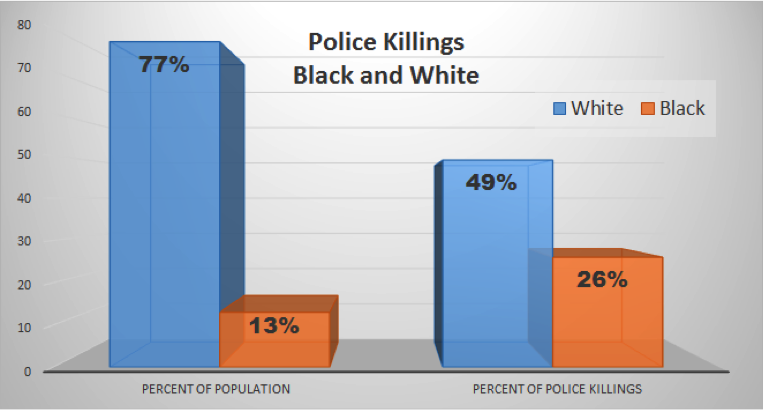 The Black Lives Matter movement has been countered by statements such as all lives matter and police lives matter. This point must be made perfectly clear: Nobody is disputing that.

Life, liberty and the pursuit of happiness; the three fundamental, inalienable and God-given rights upon which this country was founded are far less certain for young black people than they are for the rest of us.

White people make up 77 percent of the U.S. population, but are the victims of only half of police homicides.

Black people make up about 13 percent of the U.S. population, but are the victim of 1 out of every 4 police homicides.

That means during a police interaction a black person is three times more likely to be killed than a white person.

For similar crimes, black people are sentenced to prison more often and receive an average of 50 to 90 percent longer prison sentences than white people.

When mandatory minimum sentences were established under the War on Drugs, crack was given a mandatory sentence 100 times longer than cocaine. Whether intentionally or not, this led to heavily disproportionate sentencing for blacks.

In the U.S. the simple fact is police are too violent. There were just under 4,000 people killed by a random stranger in 2014. That means about one in every 80,000 people will kill a random stranger. Adding federal, state and local police together there are roughly 1.2 million Law Enforcement Officers in the United States. I want to be as fair to police as possible here — many of them perform a great service with little thanks­ — and their job is by no means easy. However, there is still, perplexingly, no official data on police killings; they are reported only voluntarily.

The two most useful police killing trackers available are by The Washington Post and The Guardian. As I type this  the numbers sit at 668 people killed by police. Even if we assume police in this nation will not kill one more person the rest of this year, then one out of every 1,674 police officers will kill a person, with that violence spread disproportionately toward black lives.

Again, I know being a police officer is a difficult and dangerous job, but it is simply unacceptable that people are 25 times more likely to be killed by a police officer than a stranger. It does not have to be this way; police in other developed democracies kill fewer civilians in a decade than ours do in a month.

When the Bureau of Land Management surrounded the Nevada Ranch of Cliven Bundy and threatened to take his cattle off their grazing land, conservatives responded by calling out the anti-government militia and dozens of armed people made their way down to the ranch to stand up against the federal government.

Nevermind the fact that Bundy had refused to pay his lease on the land for more than 20 years, which he ran his cattle on. thus trespassing against a court order. Forget that he hadn’t branded half his herd, which is against Nevada state law, but he also made them free range cattle, meaning the BLM had every right to take them. Bundy was more in violation of law than Gray, Garner, Scott and Rice ever were.

“All Lives Matter” is not an acceptable response to “Black Lives Matter.” All lives are not three times more likely to be killed by an officer and all lives do not feel that they are diminished by their birthright. To respond with “All Lives Matter” is to illigitimize the struggle of black lives. Saying black lives matter does not mean they matter more than others; it is a cry that they matter equally. It does not diminish the value of other lives any more than breast cancer awareness day diminishes the gravity of alzheimer’s disease.