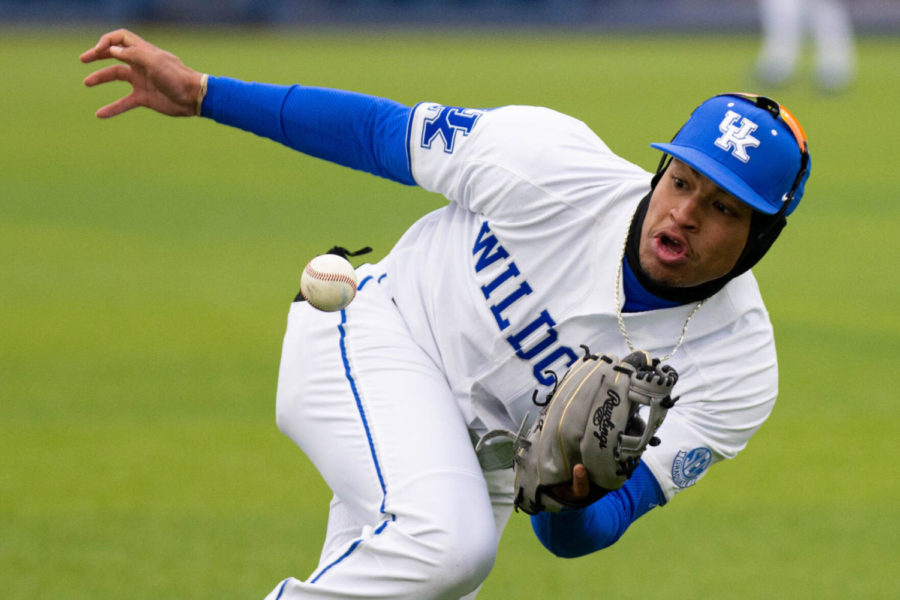 Reeling from a loss to Eastern Kentucky on Tuesday, Kentucky baseball has a tough series ahead against former No. 1 Ole Miss.

In what was supposed to be the team’s 2,000th program victory after a big series win over No. 14 Georgia, the Wildcats were overcome by poor starting pitching, falling to EKU 6-3.

Now with the momentum potentially knocked out of their sails, the Cats host the former No. 1 team in the country, who is also looking to bounce back after being swept by Tennessee the weekend prior.

While that sweep and fall to No. 10 in the D1Baseball Top 25 may signal to some that the Rebels may not be much of a threat, they showed flashes of what got them to No. 1 in the first place on Tuesday, beating North Alabama 20-3 in seven innings.

While that win over the Lions was a dominant one for Ole Miss, the team is still out to rebound after the UT series and has its eyes set on the Wildcats.

Similarly, the Cats have their eyes set on the Rebels, still searching for the coveted 2,000th win and seeking their third win in a ranked series this season, second in conference play.

While its bats struggled against the Colonels, Kentucky has paved its road to success this season on the backs of its bats, such as its two-hole hitter Chase Estep who, even after going 0-4 against EKU, is still batting .400 on the season.

Recently, junior Kentucky native Jase Felker has also answered his call, going 7-9 in the past two games with a walk in the second, inflating his batting average up to .469.

“I’m just thankful that his number has been called and he’s been ready,” Kentucky head coach Nick Mingione said. “We got other guys too that are just waiting for their opportunity, and when you get them in there you want to see them be aggressive. You want to see him execute what they’ve done in practice, and Jase is a guy that’s done that, he’s definitely taking advantage of his opportunities.”

Other big names such as Ryan Ritter may be struggling at the plate recently, but they are still fully capable of unleashing their talent when the opportunity presents itself and cannot be overlooked as a threat in the lineup.

On the other side of the aisle, Ole Miss doesn’t have any batting averages that pop off the stats page, but just looking into its results this season is all one needs to see that the Rebels can score runs.

Ole Miss has out-scored its opponents 223-213, and removing the Tennessee series brings that number to 216-187.

While the starting pitching gave way against the Vols, Ole Miss has held opponents to five or fewer runs in 14 out of its 24 games.

Looking back at Kentucky, the team’s weekend pitchers Darren Williams and Tyler Bosma performed well against Georgia, but its Friday pitcher, Cole Stupp, has been declared out for the remainder of the season due to a forearm injury sustained against the Bulldogs.

Mingione opted not to place Tuesday pitcher Seth Logue in that spot, with Logue going out on his usual schedule and struggling, taking the loss against EKU.

“We made the decision that Seth was going to start this week and give us the best start possible so he would not be an option for this weekend,” He said. “We just felt like it was important to keep Seth on his normal routine and give him the opportunity in the midweek.”

While there may be no other options, it’s unlikely Kentucky wants to have a bullpen day on Friday, likely hoping to keep its arms fresh for relief situations in the latter two games of the series.

With no easy solution in place, all eyes will be on game one on Friday to see who Kentucky goes with and, more importantly, how it works out for the team and whether or not it’s a viable solution.

As the season prior has shown, Kentucky baseball is unpredictable and is fully capable of beating very good baseball teams, winning series over both TCU and Georgia.

That said, the odds will certainly be stacked against the Wildcats on Friday, and depending on the result, that game could sway the entire series as a whole.

“We get two home series in a row back-to-back so anytime you’re at home you have got to play good and you gotta win those series,” Mingione said. “We got to get a good practice on Thursday and have a good weekend.”

Regardless of what happens, Ole Miss at Kentucky is simply an unmissable series early in conference play.

Game one of the series is scheduled to take place Friday, April 1, with the first pitch currently scheduled for 6:30 p.m. EST.