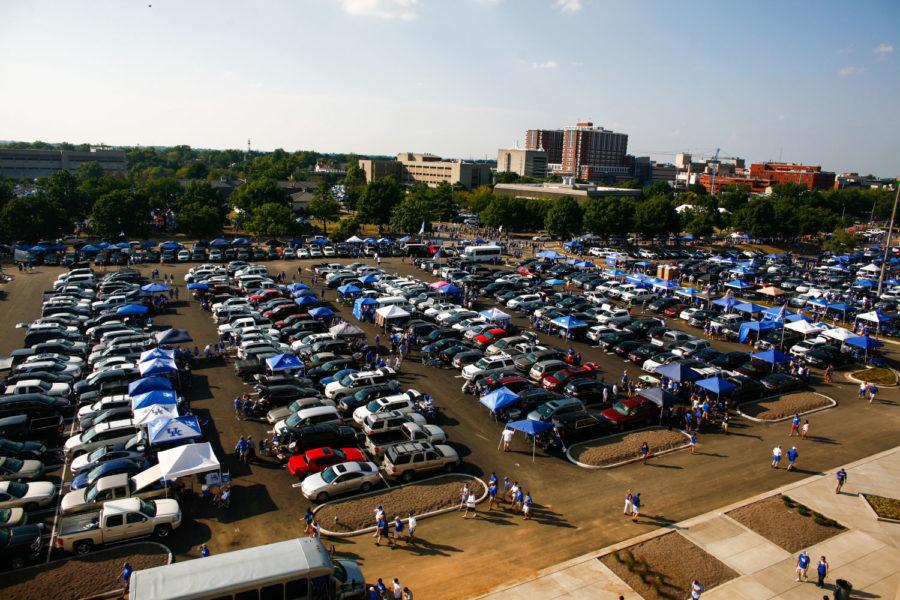 UK spent more than $60,000 on parking arrangements in anticipation of UK’s first Thursday football game since 1939.

City and university officials said during a press conference Monday that planning for the upcoming game on Oct. 15 began more than a year ago.

Residential students will have to move their cars from K Lot, Sports Center Drive and the Sports Center garage by Thursday, Oct. 15 to off-campus locations.

Employees, particularly people who park near the UK Chandler Hospital and people who park in South Campus, and commuter students, may need to park at off-campus locations Thursday and take a shuttle into campus.

UK made deals with private, off-campus businesses including Southland Christian Church and the Lexington Legends’ Whitaker Bank Ballpark to allow people to park in their lots while campus parking spaces are unusable.

UK generally paid $3 per spot for single-day use, but paid slightly more for some spots that were reserved for multiple days. In total, UK paid more than $26,000 to reserve more than 6,300 spaces, as of Monday afternoon.

The university is working to rent an additional 500 spaces from partners who were reluctant to take the deal last year when they started planning.

The university partnered with Go Ground, a transportation management firm, to provide shuttles for people who must move their cars off campus.

The company worked in a similar capacity for people in Philadelphia during Pope Francis’ visit. UK will pay Go Ground $40,000 for their services surrounding Thursday’s game.

Information about where students, faculty and staff must move their cars is available on the university’s website.

Classes and clinics will operate on a normal schedule, as well as the hospital.

“We understand that our patients need us to report to work as usual,” said Ann Smith, the chief administrative officer of UK HealthCare.

University President Eli Capilouto said faculty will have the final say on whether to continue with scheduled exams and assignments.

Staff and faculty who do not park in game day-restricted spots will be able to park in their normal spots, but university and city officials said those employees should plan accordingly, expect delays and leave early for work.

Lexington Police Chief Mark Barnard said students should be careful if they decide to park in near-campus neighborhoods. Parking laws will be enforced in those neighborhoods.

Aside from moving their cars from restricted parking lots, Barnard said traffic, particularly on Nicholasville Road, could get backed up. Imagine Nicholasville Road on a normal weekday at 5 p.m., then add a football game to the mix, he said.

Three of the four UK football games this year have sold out, and the Thursday game against Auburn has already sold out.

University and city officials including Lexington Mayor Jim Gray said despite the challenges of moving cars and parking, they were excited for the Thursday game.