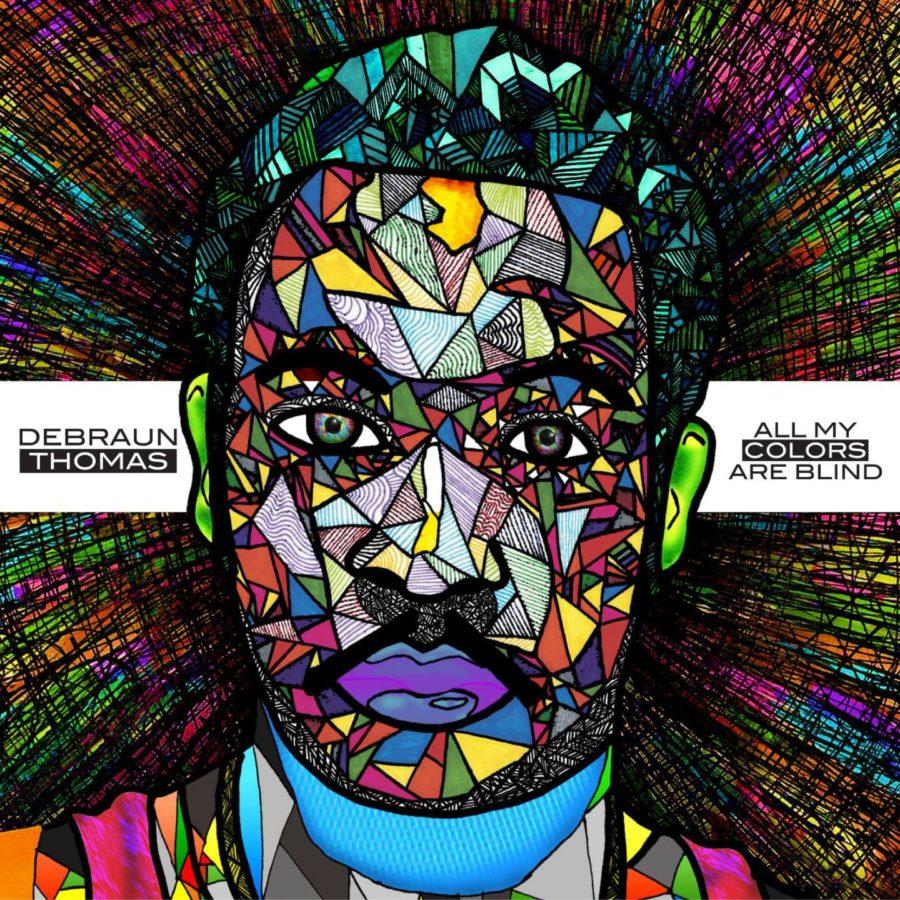 By Matt Wickstrom [email protected] Local musician and radio host DeBraun Thomas said that his debut album “All My Colors Are Blind” is more than a CD, it’s a culmination of the last three or four years of his life. Thomas teamed up with Lexington-based Shangri-la Productions to make the record, which is comprised of an all-star cast of local musicians, including Lee Carroll, Dave Clark, Willie Eames, and Coralee and the Townies. “This has been a scary thing, putting my name in front of something and not having it be a band, so I asked all my friends to be a part of it with me,” Thomas said. Thomas called upon artist and former WRFL DJ Daniel Morgan to create the album artwork. Morgan asked Thomas to send him a selfie, which he made look like an abstract work of stained glass. Thomas admitted he was uneasy at first about naming the title of his album after one of the tracks, but after seeing what resulted from Morgan’s spark of creativity he couldn’t be more pleased. “The cover is a representation of the fact that we’re all different colors, and no one color is greater than the others,” Thomas said. “Sometimes things get too focused on color, and when you really think about it you have the extreme of the absence of color or all colors combined, but either way they’re both beautiful.” Thomas dedicated “All My Colors Are Blind” to his late uncle Steve and Peter Chaplin, a late family friend, who helped expose him to music and encouraged him to be himself. Both gifted their vast musical libraries to Thomas when they died. “Those two really influenced me to not be afraid about what others think about what I’m listening to,” Thomas said. Thomas’ parents also influenced and encouraged his musical endeavors. His mother always had a wide variety of records and tapes playing in their house while he was a child. Once he turned 15, Thomas began joining his father, a singer, at his shows around their hometown of Menlo Park, Calif. In high school, Thomas acquired an interest in being a radio DJ, after learning that Sly Stone, one of his favorite R&B musicians, got his start in radio. “I originally wanted to be a doctor as a kid, but in high school I realized how much I hated school, so I started getting in to radio,” Thomas said. Soon after getting onto campus at UK, Thomas got involved at WRFL 88.1, where he was a long-time veteran of the airwaves, hosting the “Insomniatic Funk Show,” which aired from 3-6 am. He’s since renamed the show to “The Crunkadelic Funk Show”, which now airs on WUKY 91.3 every Saturday from 9-10 pm. Thomas produces a weekly column titled “Music Monday” which profiles different Lexington-based musicians. Thomas is also interested in social activism and community building, and produced a documentary on the 50th anniversary of the civil rights march on Frankfort. Thomas is also is a regular volunteer at the local Boys and Girls Club of America. There

sildenafil generic, http://furosemide20-40mgdosage.com/, furosemide for dogs, lisinopril, gabapentin, http://augmentin875-dosage.com/, augmentin 875 will be a CD release party on Saturday, Oct. 17, at Cosmic Charlies, starting at 10 pm. The show has a $7 cover, and features Sunny Cheeba as the opening act. Thomas will be joined on stage by many of the artists whom accompany him on his album, as well as other special guests. Albums will be for sale at the show, but people who bring a copy of the CD to the show will get in free. Albums can be picked up locally at CD Central as well as on most major digital platforms.
Delete Image
Align Left
Align Center
Align Right
Align Left
Align Center
Delete Heading